The list is longer than the Mountain Parkway, Mt. Sterling to Prestonsburg. Parade of gifted basketball stars who twinkled in heavens over Inez on to Whitesburg and points between — Paintsville to Carr Creek, Virgie, all the way to Corbin.

Ya-Missed-Him, big shot! is familiar refrain cast toward whoever coaches at University of Kentucky.

Best surprise in Commonwealth hoops early on is Justice at Louisville.

Twenty-six minutes for the new kid. Justice showed audacity with a sparkling reverse lay-up among the trees, made clever passes and see-the-floor savvy, Justice is latest in an incredible decades-long list of savvy, tough, team players out of eastern Kentucky gone mostly ignored come back to haunt recruiters paid in six figures to pick out players.

Kudos to Rick Pitino for recognizing the kid from Shelby Valley. 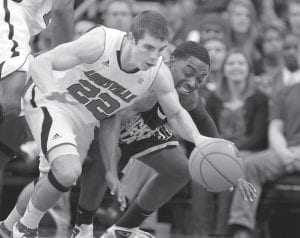 MOUNTAIN FROSH DOING WELL AT UofL — Elisha Justice, Kentucky’s reigning Mr. Basketball, has been the “best surprise” so far in this young basketball season, says columnist Bob Watkins. Justice, who starred at nearby Shelby Valley High School in Pike County, is a point guard who initally walked on for Coach Rick Pitino at UofL, but has since been given a scholarship. “Kudos to Rick Pitino for recognizing the kid from Shelby Valley,” says Watkins. UofL was off to a 4-0 start heading into Wednesday night’s game against Florida International at the new YUM! Center in downtown Louisville. (AP photo)

Bad.
Wins UK wasn’t supposed to — only one, South Carolina.

Bad.
Mike Hartline at his worst in Knoxville.

Ugly.
Next season — at LSU, South Carolina and Georgia.

Ugly.
UK fans paid more for tickets and parking than ever before.

Team to watch: Murray State. The Racers rocked Stanford last week and are better than 3-3 record. Why? Experience, quicks and defense.

He is 99 percent sure there will be a lockout next summer. “I think it’s highly probable,” Hunter told The Associated Press.

Hunter is posturing of course as he prepares to face Commissioner David Stern’s call for player salary cap.

“The owners aren’t budging on their demands for cuts in salaries, contract lengths and guarantees, annual raises, and the rookie salary scale.”

“I don’t really see that (Stern’s) argument’s all that compelling for the changes that they’re asking for,” Hunter said.

Why should we care? While the NBA will have its media event draft as usual next spring, college basketball fans and university beancounters could enjoy a windfall if scholarship players opt for another year as student-athletes instead of an uncertain NBA.

Bottom line? Hunter is blowing smoke. There will be no NBA player lockout.

Western Kentucky University had a forgettable football season, and an organization called Black Coaches and Administrators added nothing good to it.

Last week, Hilltopper athletics was awarded “an overall A” by the BCA on its Hiring Report Card, for making Willie Taggart head coach.

Western director of athletics Ross Bjork, in a press release, took an obligatory bow. “We are very proud to receive this report from the Black Coaches and Administrators, and we appreciate the efforts of Floyd Keith and the BCA to promote diversity in college athletics and improve our profession.”

In fact, Western’s Overall A is a hollow and sad genuflect to racism.

As certainly as Randy Shannon was hired at Miami to get the Hurricanes back to the land of Howard Schnellenberger (and fired last week when the ‘Canes finished 7-5), Taggart was hired to get Hilltopper football back to its glory days. Importance of skin color is in the eye of (racist?) beholder.

The BCA’s “overall A” applied here is plantation-ism and should have been ignored by Western.

• With 345 coaching wins in 36 seasons, Bell County’s Dudley Hilton is tied with retired Bob Schneider and on his way to being Kentucky’s winningest high school coach (predicted by Joe Kelly Jaggers a decade ago).

Hilton has no plans to retire.

“I don’t know what else I’d do because I can’t play golf,” he told the Louisville Courier-Journal last week. “Right now I have no desire to do that. I’m doing what I think I can do. And the good Lord has blessed me with good health too.”

• Proving that fans beyond Kentucky can rant with the best and be just as conspiratorial of mind, a Tennessee basketball fan decided SEC commish Mike Slive was ‘paid off’ to suspend Bruce Pearl for eight games after the Vols’ coach confessed he had broken NCAA rules and lied about it.

The fan wrote: “. . . if UT fans are not smart enough to figure out that Slive was paid off on this one, you deserve to be a Vanderbilt fan. It is time fans (who) care about Bruce stand up and find a way to let Slimey Slime Ball Slive know how we feel. Let’s bombard his office with calls and letters.”

From an ESPN Report. The NBA Miami Heat’s less than dominant start this season was noted by President Barack Obama. “It takes some time for the team to come together,” he told ABC, prompting Orlando Magic coach Stan Van Gundy to say, “I know there’s a lot of time in the day, but I’d be more confident if (the President) didn’t know what was going on in the NBA.

“We got to get some people back to work. I don’t think he needs to be worried about turning the Heat around. Let (Heat) coach Erik Spoelstra worry about that, because Erik certainly isn’t turning the economy around.”