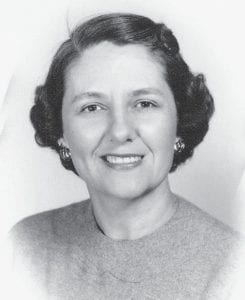 Elizabeth Dudley “Dottie” Combs Webb was born in Seco in 1925.

Elizabeth Dudley Combs Webb was born on April 25, 1920, at Seco, in Letcher County, Kentucky, to the late Eli Lovell and Georgia Ann Cornett Combs. She departed this life and entered eternity on Saturday, November 28, 2015, at her home at Lafayette Place, Lexington. She was 95 years, 7 months at her passing. Elizabeth, known since childhood to friends and family as “Dottie,” was the beloved wife of Woodford “Dood” Webb of Whitesburg, who preceded her in death in 1993. They were the parents of four children, Donald Woodford Webb (1939 – 2013), Ralph Dudley Webb, Deborah Webb Howard, and Judy Webb Lowry.

From the birth of her first child in 1939, until the college graduation of her youngest in 1983, Dottie’s pride and joy were her children. There was little opportunity for “empty nest syndrome” in her home. She was always proud, but never overly impressed, with the achievements and contributions made by her offspring, although there were moments when her Combs temper would get the best of her and she would have a word or two for the Lexington Herald- Leader for criticizing her boys! 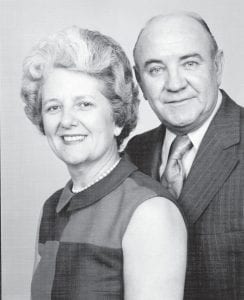 Dottie was a graduate of Whitesburg High School, class of 1938, and she loved to tell stories about making the trip to school every day on the passenger trains that once connected the outlying mining communities with the county seat. She loved, and maintained lifelong relationships with, her friends from those early years.

Dottie was a devoted Christian, a faithful wife, a loving mother, grand and great-grandmother, and a kind and loving friend to many people from all walks of life. She grew up during the Depression, living in several mining camps in Letcher County, including Seco, Blackey, Elk Creek, and Hot Spot, later renamed Premium, where she and her husband resided for 32 years and reared their children. Her time was well spent as she diligently looked after the needs not only of her family, but those of her neighbors and others who lived and worked in the mines there. 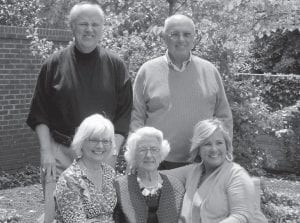 At one time, Dottie’s home had the only telephone in the camp, which was actually an extension from the phone at the mine office. As a result, whenever there was an important event or an emergency, such as illness, or impending birth, Dottie or Doodie would be asked to make the call for help. Many times the telephone would ring in the middle of the night and they would have to leave to go deliver bad news.

One night she awoke to find a mule with its head stuck through a dining room window. The rider just needed to call the camp doctor to come deliver his baby. Dottie always worked to help those in need, made it a practice to take food in a time of crisis, and wouldn’t think of not visiting the funeral home in the event of a death.

Dottie was instrumental in the establishment of a small Baptist mission, affiliated with the Whitesburg Baptist Church, and could be seen many Sunday mornings driving Doodie’s 1946 Willys Jeep station wagon, filled to the brim with children and adults she had picked up to take to Sunday School. That mission grew over the years into Premium Baptist Church, a thriving community church that has been a source of comfort and hope to many. She was a longtime member of the Whitesburg Baptist Church. After relocating to Lexington, she became a member of Calvary Baptist Church. 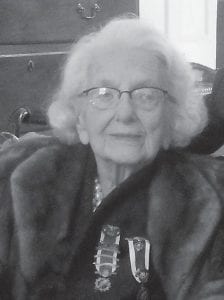 In 1975, Dottie and Doodie renovated the house at the west end of Main Street in Whitesburg that was built by Doodie’s parents, N.M and Ellen Webb, around the turn of the century, and had served as home to the Webbs and their 10 children for over seven decades. A small building had adjoined the house where Doodie’s father had founded and established The Mountain Eagle in 1907, that little publication going on to become one of the primary newspapers of eastern Kentucky. Dottie put much time and energy into updating and maintaining the family home as a place for numerous Webbs, who were widely scattered, to return to and sit in the porch swings while reminiscing about their memories of family and place.

After Doodie’s death in 1993, Dottie remained in Whitesburg until 1999, when she moved to Jesselin Drive in Lexington to be closer to her children, and then made a final move in 2010 to apartment living at Lafayette Place in Lexington. There were many highlights to her years in Lexington, including her kind neighbors on Jesselin, a visit by her Whitesburg Baptist Church friends, who arrived by church bus to visit her in her new home, her friends from DAR who were so careful to include her in their activities when they were in town, her beautiful yard and flowers, the friends that she made during the years she was able to attend Calvary Baptist church, which had become her new church home, and a new set of friends and neighbors at Lafayette Place.

Although Dottie enjoyed her years in Lexington, her heart was also back in the mountains with her many dear friends there. Dottie had a strong sense of history and her heart was often heavy with the loss of so many she had loved and enjoyed over the years.

Her great-grand children, Ford and Greer Webb, Lilly and Anna Claire Mendiondo, and Zoey Montgomery, all of Lexington, and Daniel Webb Howard of Seattle, also survive Dottie. She also leaves to cherish her memory several nieces and nephews, and other family and friends.

The family is grateful to Dr. Terrance Furlow and his staff for the care and compassion they have provided to Dottie throughout the years. We are also grateful to Crystal Standifer, who has overseen Dottie’s health care for the last four years, and has coordinated an outstanding team of caregivers including Dina Fletcher, who have made it possible for her to live out the last year of her life with dignity and independence.

Honorary pallbearers will be the ladies of the Pine Mountain Chapter of the Daughters of the American Revolution.

Expressions of sympathy may take the form of contributions to Hospice of the Bluegrass, 2409 Members Way, Lexington, Kentucky 40509, or to the Galilean Home, 712 South Fork Church Road, Liberty, Kentucky 42539.

We’ll see you in the morning.”