Elle King is a rocker of the old-school type 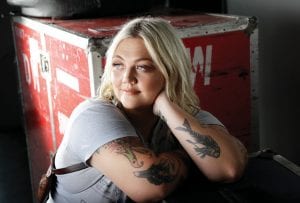 A few weeks ago, Elle King was in a rehearsal hall in Nashville, Tennessee, going over guitar licks from a new song with her band mates who were all wearing matching jackets that read “Brethren” on the back. The musicians were trying to get a handle on the new material from King’s upcoming album.

“It’s impossible for any guy to hit on me because I am like constantly surrounded by, like, at least eight dudes at a time, all in matching jackets,” the 29-year-old King joked.

But the posse of long-haired men has actually come in handy once when King got in a fist fight with another girl. “They just kind of picked me up and took me out,” King said.

King decided to name her band The Brethren because they had all come together like a family to record and write songs for “Shake the Spirit,” the follow-up to her 2015 debut “Love Stuff,” which resulted in two Grammy nominations for her hit song “Ex’s and Oh’s.” Writing with members of the band in Los Angeles and recording together in a studio in rural Texas helped King get through a particularly tough and emotional year.

King had secretly eloped in 2016 with Andrew Ferguson, a man she had met just weeks prior, but a year later, she announced on Instagram that they had split. Throughout it all she was in a deep hole of depression, dealing with substance abuse and what she’s described in a social media post as post-traumatic stress disorder.

“I was really digging the bottom of the barrel and I was a wreck,” King said. “I was just so sad all the time.”

That’s when her Brethen band mates showed up to support her. Guitarist Cameron Neal and Paul DeVincenzo, who plays bass, started going to her house in L.A. and writing for days on end.

“We knew that writing for her was helping her to get to a better place,” said Neal. “If she wanted to stay at home for 10 hours a day and just write, we would do it, surrounded by disco balls and furry blankets. We always saw the best in Elle when she was picking up a guitar and playing music.”

What came out on the new album are songs like “Good Thing Gone,” an emotional roller coaster in the vein of a classic Motown torch singer. She sings, cries, wallows and whispers her feelings through lyrics like “I never fully had faith, you see, ‘cause I always knew you’d fall out of love with me.”

“Every song was just like another layer away from just this sadness and this darkness,” King said. “We’re all very together and bonded through this experience.”

She gathered the band in a Denton, Texas barn-turned-studio to do the recordings, some of which she had to do in one take because she started crying.

But King keeps it light-hearted for most of the record. She jokes about a certain sexual act in “It Girl,” calls out a cheating ex by admitting her own infidelity on “Man’s Man,” and gives her own version of a crying-in-your-beer country blues song on “Sober,” when she promises “I’ll fix it all when I’m sober.”

The album ends on a redemptive song for King called “Little Bit of Lovin.’” The guitar-heavy rock anthem features King’s raspy, growling vocals backed by a choir of harmony singers. She had originally wrote the lyrics as, “There ain’t no more lovin’ left in this heart of mine,” but then decided that wasn’t right. She changed it to, “I still got a little bit of lovin’ left in me.” At the midpoint of the song, she gives an empowered sermon on love, strength and hope.

“It was like my spirit was singing to me and being like, ‘Yo! Snap out of this, girl! You got this and you can do this,’” she said.

King has a reputation for being a strong-willed and tough-as-nails woman, a rock ‘n’ roller of the oldschool variety. But she admitted to some trepidation about singing the new songs live, especially now that she’s not relying on crutches like alcohol.

“I don’t want to hide behind anything anymore,” King said. “It’s nerve-wracking to go onstage because when you’re drunk, you’re like, ‘I don’t care! This is great!’”

Mostly she wants people who have been as lonely and down as her to hear the music and find a light at the end of the tunnel, even if that message of self-love doesn’t sound very hardcore.

“There are people out there that don’t know how to love themselves,” King said. “I don’t care if people say that’s not rock ‘n’ roll or whatever. I am rock ‘n’ roll as hell, man. And I went through all of this and I was just so broken and I came out of it OK, and better. Way better.”