Elliott Sadler not ready to quit 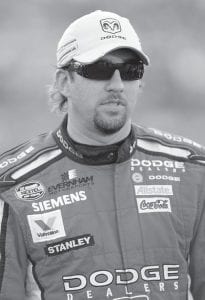 Elliott Sadler does a great job shilling for his sponsors, and he’s a natural in front of cameras.

When his days as a NASCAR driver are over, the 13-year veteran probably is headed toward a healthy second career in television.

He just isn’t ready to hang up his helmet yet.

The future is uncertain for one of NASCAR’s most likable drivers. He’s in the midst of his sixth consecutive winless season, and his prospects of landing a solid ride in the Sprint Cup Series are fading with each week.

Richard Petty Motorsports last week said Stanley, which currently sponsors Sadler, would move to Marcos Ambrose’s car when he joins the organization next year, and the team has given no indication it’s planning to bring Sadler back in 2011.

So, when he pulled in last week to Bristol Motor Speedway, where he earned his first career Cup win in 2001, he couldn’t stave off the emotions that come with so much uncertainty.

“I told my wife, ‘This might be the last Bristol night race I ever race in,’” he recounted. “That’s hard to swallow.”

It may not be totally over for Sadler, though.

He’s shown new life outside of his Cup car, and has proved throughout the industry that he’s still got something left in his tank when given the right opportunity. It came from Kevin and DeLana Harvick, who offered Sadler some seat time in their truck and Nationwide Series rides.

Sadler won his first NASCAR race since 2004 when he drove a Kevin Harvick Inc.-owned truck to a win last month at Pocono, and in nine races between the two series, he has five top-10s and 132 laps led.

In Cup, Sadler only has one top-10 this entire season and a grand total of six of them over his last 60 starts.

But it’s not entirely Sadler’s fault. When he jumped from Yates Racing to Ray Evernham Motorsports midway through the 2006 season, he figured he was moving into the best opportunity of his career.

Instead, the team was sold to George Gillett Jr., and what was left of the original organization later merged with Richard Petty Motorsports. As funding dried up, the team tried to push Sadler out before the start of the 2009 season.

Sadler fought to keep his job, but it’s not exactly proven to be worth his while. He’s had six diff erent crew chiefs since 2006 — four of whom had never held the position before — and has slogged along through financial uncertainty that seems to have affected to some degree everyone in the organization except Kasey Kahne.

And Kahne, so eager to move on himself, announced in April a deal to drive for Hendrick Motorsports two years from now. He didn’t even care that there was no plan for what he’d do next season when he decided to leave.

So now Sadler waits to see what’s next, and when he left Bristol this weekend, he had no idea.

“I wish I had an answer,” Sadler said. “A couple of weeks ago I really thought I had something lined up and it kind of slipped away. I was thinking, ‘I’ve got to regroup and try something else.’ What I want to do is be competitive and run up front. I don’t care what the vehicle looks like that I run in.”

And that’s what likely will continue Sadler’s career.

He drove for KHI at Bristol in both the Trucks and Nationwide races. He was in contention for the win in the truck, and finished third after winning the pole and leading 26 laps in Nationwide.

Harvick has been impressed with Sadler’s performance, and turned into one of his biggest supporters.

“I think in the right stuff he can be competitive at whatever level he is in,” Harvick said. “You don’t just win all the races that he won … and just forget how to drive, and at some point you are only as good as what you drive.

“I don’t know all the ins and outs of that particular situation (at RPM), but every time he has been in our No. 2 truck, he is in the top-five and competitive every week.”

It’s catching people’s attention, and giving Sadler a confidence that some think is what he’s been lacking in the Cup car.

“I think he’s just been in a bad situation, and sometimes it takes really searching yourself to find out what’s going on,” Evernham said. “What’s happening is that Kevin Harvick is saying ‘Hey, Elliott Sadler can still drive a race car.’ I’ve always believed he could, and I don’t know why he doesn’t run any better than he does in the Cup stuff .

“Like every athlete, they get in a slump and it takes something to spark them out of it. Maybe this is the spark that brings him out of the slump.”

Sadler would like to put something together with Harvick for 2010, and believes he will drive some for the team, he just doesn’t know to what extent. Either way, the Harvicks have given him a second chance that he’s not taking lightly.

“The coolest thing about racing for Kevin is they believe in me 100 percent,” he said. “They believe in what I’m telling them, they believe when I get in the car or truck that they have a legitimate shot to run up front, lead laps and win races. To me, that’s a really good feeling.”