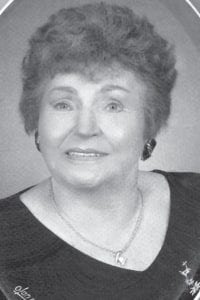 Elma Rearden Craft was born March 4, 1923 in Valley Station, Ky., the daughter of John and Jenny Rearden. She died peacefully on December 10, 2012.

While growing up on a large and successful family farming operation, everyone worked the farm. The lessons learned on the farm and during the Great Depression taught Elma the importance of good, hard, honest work, a trait she passed on to all three of her children, Bob Craft (wife, Alycia), Barbara Jarvis (husband Dennis) and John Craft (wife Linda).

Elma, married Bob Craft from Millstone in Letcher County just as World War II began. They made a full 32-year career in the United States Air Force. Bob and Elma were transferred to many USAF bases throughout the United States and Okinawa, Japan.

They raised their family as an honorable military family throughout their young family life. They dedicated their military life to the USAF and enjoyed exploring every place they were stationed with their children.

The two became successful real estate investors, owning many homes in the Orlando area. Elma retired from the Civil Service after 30 years, working her last 15 years as the head of the Naval Training Equipment Center, while her husband was the only USAF sergeant in the Navy in charge of the Orlando Naval Training Hospital.

After retirement, Elma and Bob traveled with the Airstream club for more than 40 years (WBCCI #9770) throughout the U.S, Alaska and Mexico. They were very active in the Airstream organization, preparing the rally sites. Elma was also secretary of the 600-member Square Dance Club.

Elma and Bob moved to Ocean Walk in Indian Harbor Beach 18 years ago. They loved the Atlantic Ocean and walking the beach, and they especially loved the Florida’s sea turtle hatching season.

They supported the local charities and military organizations and thoroughly enjoyed life, with their local Eau Galle Baptist Church and friends and family.

In lieu of flowers, please donate to the charity of your choice, or to Mom’s “Hospice of the Comforter,” 480 W. Central Parkway, Altamonte Springs, FL 32714.

Arrangements are being handled by Ammen Family Cremation and Funeral Care in Melbourne, Fla. (321-724- 2222).