Elmer Hill and the lynching party 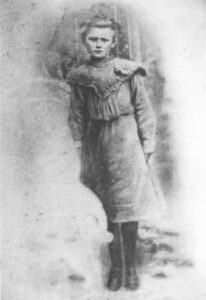 Mamie Womack, known as Nannie to her friends, never concerned herself with her walk home except for the final 300 yards, the lane that led to her home.

The Russell County, Kentucky, sheriff was nervous as he fidgeted with his boot laces in the Jamestown jail late in the afternoon of November 13, 1908. A heinous crime was committed just five days before. It was an unusually bloody crime, and it happened near the Mt. Olive School.

The suspected culprit, Elmer Hill, was captured in the early morning darkness several days later while hiding in an outbuilding in the nearby Sano community. He was taken to the Russell County Jail. Although it was a Sunday he was brought before Judge H. H. Dunbar and a trial was set for the following morning.

“Elmer ought to hang for this crime if he’s guilty,” Judge Dunbar told the sheriff following the proceedings. “I’ve got a feeling that some folks want him to hang even without a trial. There’s talk, Sheriff, that there’s gonna be a necktie party. You probably need a couple of extra deputies tonight. We’ll make sure they have scatter guns.”

Sunday afternoons were normally lazy in the small country town of Jamestown, but many people were coming and going, talking quietly in small secretive groups. Several had sidearms.

The sheriff was concerned for his own safety in addition to that of Elmer Hill. His duty was to preserve and protect prisoners until they were sentenced and legally removed from his watch and care. The well-traveled lawman devised a plan to prevent a lynching.

“Tom, ride out to my house and tell Lucy to come over here in the wagon and to bring her sister and my mother,” the sheriff told his puzzled deputy. “And have them bundle up one of her sister’s dresses, hat and coat. She’s a stout lady and her clothes should fit Elmer. We need to get him outta here before they come after him with a rope. Don’t whisper a word about this.”

The folks milling about the downtown streets paid little attention an hour later when the ladies arrived and entered the jailhouse. In the minutes that followed the prisoner was dressed in a wool dress and all the accessories. Once he donned the hat covering his hair it was hard to tell he wasn’t a woman especially since he did his best not to take short steps.

“Elmer, if you try to escape, I’m gonna shoot your head off,” the sheriff told him. “I’m trying to save you from a lynching party, so you better not try and take advantage of it. When we walk outta here you better give the best imitation of a woman that you can do. Now Lucy … show Elmer how to walk like a lady.”

“No, no Elmer, don’t take such long steps,” the long-time deputy Coulter chided him. “Try it like this.” The deputy’s masterful demonstration had everyone trying their best to keep from laughing.

“Now Elmer you’ll need to skooch a little closer together and keep your legs together or they’ll know you’re not a lady.”

Afterwards the sheriff appeared to leave the jail with his wife, sister-in-law, and mother. He gave a masterful performance as he assisted them in boarding the wagon before proceeding to ride out of town on the Jamestown- Greasy Creek Turnpike. The vigilantes who were hanging around the courthouse didn’t notice that Elmer Hill was disguised as a woman, having taken the place of the sheriff’s sister-in-law who remained inside the jail.

The wagon pulled onto the ferry and was transported across the river to Monticello where Hill was locked in a jail cell in the care of Sheriff Wright who was not so pleased to have the troubled and hated man in his official care.

It had been less than a week before that Mamie Womack, called Nannie by her friends, walked home with a group of schoolgirls, gleefully talking about happenings of their day along the way. The group continually diminished in number as each reached the individual trails to their homes. Finally, within a quarter mile of her home she was the lone walker. She walked the trail five days each week and nothing ever went wrong except when once she was caught in a thunderstorm and was thoroughly drenched.

Nannie never concerned herself with her walk home except for the final 300 yards, the lane that led to her home. It frightened her because it was so heavily wooded. On this day she never made it home.

She heard a noise from behind as she headed home. She turned just as someone grabbed her. She was hoisted into the air, hurting from the tight hold on her as she was taken into the nearby woods. She was brutally assaulted and murdered.

Her mother had an eerie feeling and noticed that Nannie was 10 to 15 minutes late. That was not normal for her. The family began searching for her and enlisted others from the area to look for her too. The search continued after nightfall as they used their lanterns.

Morgan Womack, Nannie’s grandfather, and Clay Damron were searching in the same area. The elder Womack noticed that Damron had not moved for some time. Upon checking on him he saw that his friend had found his granddaughter. Mr. Womack fainted upon seeing her. Her face and head, pulp-like, appeared to have been beaten by blows from a bloodied tree limb that lay nearby. She had been raped, murdered, and terribly beaten. Both men were stunned by the grisly scene.

Nannie’s body was taken home and “laid out,” covered by a sheet, until a coffin could be completed and brought to the Womack home. This was often done in that era.

Nannie’s mother was sure that it was Elmer Hill who killed her daughter. Elmer was a cousin of the dead schoolgirl and lived in the same neighborhood. He was approximately 24 years old, weighed roughly 155 pounds and had a speech impediment. He had a bad reputation and was partial toward younger girls. He didn’t seem to have the confidence to deal with females near his age unless they, too, had some handicap.

Many area residents came to the Womack home to offer comfort and show their respect and support for the family. Elmer Hill was one of these who came to see his little cousin.

“A person who would do this sure is a mean person,” he was heard saying.

The men gathered outside to discuss the crime and Elmer soon joined the informal meeting. A horseman arrived and informed the group that bloodhounds would soon arrive from Lincoln County to track down the killer. Elmer seemed concerned and hurried down the wagon road with a quick step.

Read more of this true story next week. Jadon Gibson is a freelance writer from Harrogate, Tennessee. His stories are both historic and nostalgic in nature. He wishes to thank Lincoln Memorial University, Alice Lloyd College, and the Museum of Appalachia for their assistance.