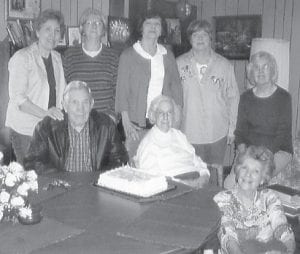 Elsie Banks had a good birthday celebration. She says she is “95 years old and getting younger every day.”

She had a lot of presents, cards, company and phone calls. Her good friend, Mattie Vern Banks, called from Elizabethtown, and a Vermillion cousin she met through The Mountain
Eagle
and many nieces and nephews.

On her birthday, Carl Bennett and Marsha brought her a lovely dinner. A few days earlier, her nieces and nephew surprised her with birthday cake, ice cream, and a flowering plant.

A bunch of cousins got together at their Aunt Virginia’s for a potluck dinner and lessons on making dumplings and ribbon embroidery. Enjoying the day were Janice Wolod, Thelma Ison, Marilyn Banks, Anna Yonts, Carol Caudill, Linda Lucas and Doris Banks. Also coming for dinner were, Ron Wolod, Duane Yonts and J. T. Caudill. It was a great day.

Virginia Brown’s granddaughter Jenny Lou and her children, Jon and Crystal of Clarksville, Tenn., spent a couple of days with her. 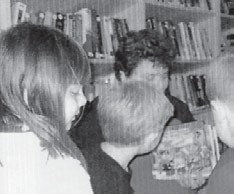 We had a happy surprise when Russell Banks of Elizabethtown dropped in for a brief visit. He was on a business trip with his boss, James Donthlatt. We really appreciated them coming out of their way to see us. Russell is the son of Mattie Vern Banks and the late Russell E. (Jeff ) Banks. He lived on Cowan the first few years of his life and visited often while he was growing up, but hadn’t been here for a long time.

Jason Brown of Jonesboro, Tenn., came by Saturday with his friend, Sylvain Bota. Mr. Bota is originally from France, and he showed us an interesting book of the beautiful mountains of France. 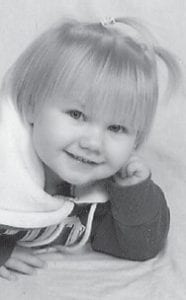