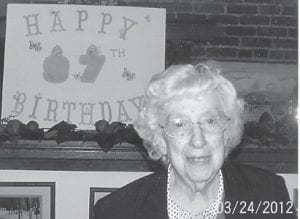 BIRTHDAY — Elsie Banks celebrated her 97th birthday March 24 with a party at The Courthouse Café.

I think the Easter bunny has played an April Fool trick on Sue Banks as her front yard seems to be carpeted with colorful eggs.

Jeremy Banks of Columbus, Ind. was recently named Outstanding History Student of the Year at IUPUI Columbus Campus. Jeremy is a volunteer student at the Bartholomew County Historical Society. He is also a student of anthropology. He is the son of Patrick and Marilyn Banks, and grandson of the late Bernard and Minnie Vae Banks.

Elsie appreciates her party and all the nice cards she received. She has had a full and interesting first 97 years. Elsie is a longtime member of the Little Cowan Primitive Baptist Church, the DAR, and Eastern Star. She wrote the Cowan news for The Mountain Eagle for years. Elsie has made many good friends and has many good memories. She continues to enjoys life.

Derek Frame, grandson of Yvonne Brown Sutphin, has returned to Camp Lejeune after a military leave. He is in the Marines.

Get well prayers for Elwood Cornett, who had surgery in Lexington.

We have lost another of our faithful older members of the Little Cowan Church. He is sadly missed by his many friends and loved ones.

Last Tuesday, Virginia Brown, Linda Lucas and I all went to visit Virginia’s sister and our aunt, 95-yearold Mattie Vern Banks. Her daughter-in-law Judy had fixed a nice lunch and Mattie Vern herself, though very weak and nearly blind, had made an asparagus casserole because she knew how much we all like it.

We had such a good visit that afternoon, talking, remembering, laughing. She told us more than once that she had had a good life and was ready to go.

Wednesday morning, soon after we were up, she fell and was taken to the hospital and admitted. She remained fully conscious, alert and so peaceful. At 5 a.m., Thursday morning, she said, “I’m ready” as though to someone not in the room, closed her eyes and was gone.

She had made many friends in Elizabethtown. The visitation was well attended with several coming in wheelchairs and walkers, and all speaking very highly of her. The funeral was a celebration of her life and her home-going, with beautiful tributes by her granddaughter, Cherie, her great-grandson, Benjamin, and her minister.

Virginia, Linda and I really appreciated her family. In the midst of their grief they were so thoughtful and considerate and took such good care of us.