Emmylou Harris, Rodney Crowell team for second album since 2013; tour will make a stop in Lexington

By JOHN CARUCCI
The Associated Press 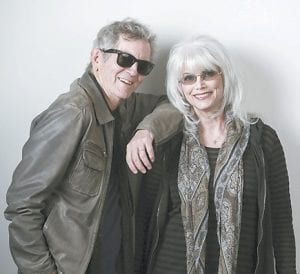 Rodney Crowell, left, and Emmylou Harris pose for a portrait to promote their album “The Traveling Kind.” (Invision/AP)

Even though the server got his order wrong, Rodney Crowell waits patiently for his egg-white omelet. He chats with Emmylou Harris as she picks at her grapefruit, revealing his easygoing nature and their comfort with each other.

But more than having similar personalities, it’s evident they share the same sense of values.

Friends for almost four decades, it wasn’t until a few years ago that they recorded an album together. That one turned out pretty well “Old Yellow Moon” won the Grammy for best Americana album. It included some covers and a few songs penned by Crowell.

That experience was so positive they decided to step it up on the recently released “The Traveling Kind” by co-writing seven of the album’s 11 songs. Now they’re off touring the United States and Europe to promote it. They will appear in Lexingon at the Lexington Opera House on Sunday, Oct. 18.

“I would certainly say the writing process was fun. On ‘Old Yellow Moon,’ we didn’t do any writing together,” Crowell said.

Harris agreed, adding that from her perspective, their fruitful collaboration derives from what she describes as Crowell’s “Rodney-ness.”

“We have no tension,” she said. “We’ve never even had an argument.”

Crowell added: “I guess you might say there’s no ego because our relationship is based on friendship.”

While Crowell penned a few of the songs on their first album and he and Harris co-wrote a majority on the new one, he doesn’t feel like you have to write a song to give a piece of yourself to the music. It’s something he feels Harris does very well.

He cites an artist that both have a connection with to prove his point.

“Johnny Cash and Emmy are similar in a way. People ask me and I say Emmy has a poet’s soul, so when she records outside material, as John did, there’s a poetic sensibility,” Crowell said.

Harris was influenced by Cash at an early age and was one of the artists who appeared on the recent cover album, “Look Again to the Wind: Johnny Cash’s Bitter Tears Revisited.” Originally released in 1964, that album provided strong commentary about the U.S. government’s mistreatment of Native Americans. She remembers buying “Bitter Tears” when it came out.

“I remember finding it in a bin. … I had that record and was impressed by the wrongs he tried to right, and I thought, ‘He’s one of us,’” Harris said, speaking of her early influence of folk music.

Cash’s record label tried talking him out of releasing the album, fearing it would alienate his country music fan base, but his regard for speaking out against injustice was more important. That’s something that’s always resonated with Harris.

“John wasn’t just country. He was always in his own world of music. He transcended every type,” she said.

Crowell’s relationship goes a little deeper. He was once married to Cash’s daughter, Rosanne, and has three daughters with her. He doesn’t think the music world will see an artist like Cash again.

“The formulaic aspect of country music today doesn’t really entertain the notion of casting about a poetic narrative like John did,” he said.

Harris pointed out that the socio-economic upbringing that influenced artists like Cash and Hank Williams has changed a great deal.

“That era is gone. We had the artists like Dolly (Parton) and John (Cash) that came from poverty, and they had something authentic to bring to it,” Harris said of their hardscrabble Southern upbringing.

Crowell then poked fun by defending a contemporary theme in country music.

“In fairness, ‘I’m gonna get drunk and drive my tractor into the wall’ is in its own way a uniquely Southern narrative,” he said.

“Most can’t even drive a tractor, or a manual transmission,” Harris interjected.