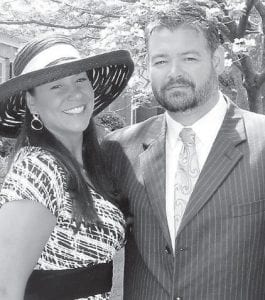 Rebecca Terrill Elswick of Jenkins and David and Barbara Myers of Bethlehem, Penn., announce the engagement of their son, David Shane Myers, to Lindsay Ann Cross, daughter of John W. and Dianne Cross of Lockport, N.Y. She is a graduate of Buffalo State University in New York, where she was a member of the basketball and volleyball teams. She is employed by Allied Electronics in Atlanta, Ga. He is a graduate of Eastern Kentucky University in Richmond. He is employed by Fleetcore Technologies in Atlanta, Ga. An April wedding will be held at Magnolia Hall in Piedmont Park, Atlanta, Ga. The couple will reside in Atlanta, Ga.