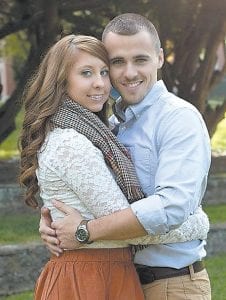 Chad and Vickie Wright of Jenkins and Marcus and Conzetta Stevenson of Phelps announce the engagement of their daughter and son, Courtney Briana Wright and Jacob Todd Stevenson. The couple met at Morehead State University, where both are in their junior year. Miss Wright is an education major. Mr. Stevenson is a pre-pharmacy major. Miss Wright is the granddaughter of Joe and Arlene Fleming of Dandridge, Tennessee, Jesse and Esther Wright of Payne Gap, and great-granddaughter Jewel King of Cromona. Mr. Stevenson is the grandson of Art Chambers and the late Ethel Chambers, William and Georgia Stevenson and great-grandson Avalean Kasey, all of Phelps. A wedding date has not been set. (Photo by Briana Davis)