Enjoyable day had at Keeneland Racetrack 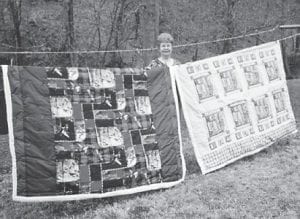 QUILTMAKER — Linda Combs is pictured with quilts she made this winter for her great-grandson and great-granddaughter, Jacob Cornett and Kylie Cornett.

Yvonne Sutphin and Linda Combs were guests of Regina Crawford at Keeneland Racetrack April 15. The food was delicious and the trees were all in bloom. It was a very enjoyable day.

On April 16, we went to Somerset Christian School for a speech and meeting with Laura Bush. She was so gracious and a real lady.

Jessica Boggs was home this week. She graduates from Campbellsville College on May 8 and we are real proud of her.

Danielle Bentley graduates from Eastern Kentucky University on May 8 also, and will be entering the occupational therapy program this fall.

Remember Dana Ison Walker of Naples, Fla., and Jerry Hall of Ice in your prayers.

There will be a yard sale at the home of Linda Lucas on April 30 by the Cowan Women’s Bible Study Group.

Donnie Jackson Adams has been accepted into the Motorcycle Mechanics Institute located in Orlando, Fla. He’s moved to Orlando and started classes April 26. Donnie has been participating in motocross racing since he was 12. He has raced in the pro motocross class for the last nine years. He raced in the 25 plus class at a national race in 2008 and got fourth place, which ranked him four overall in the nation.

About 35 people met at his home on Little Cowan on April 18 to say goodbye and wish him good luck before he left. Donnie is the son of Patsy Adams of Cowan and the late Herby Adams.