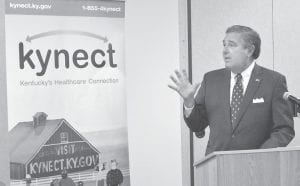 Uninsured Kentuckians swarmed to the state’s online health insurance marketplace Tuesday, causing technical snafus that delayed signing up people for coverage on the opening day of enrollment as the centerpiece of President Barack Obama’s health care overhaul got off to a sputtering start.

State officials said that by midmorning Tuesday, 24,000 people had browsed the website (www.kynect.ky.gov) and more than 1,000 people signed up for coverage that begins Jan. 1. The heavy volume temporarily halted the online application process, but computer specialists were working to fix the problems, officials said.

“This surge of early applications demonstrates the pent-up demand for quality health coverage for many Kentuckians,” said Gwenda Bond, a spokeswoman for the state Health and Family Services Cabinet in Frankfort.

Similar problems occurred in other states due to high demand on the first day of the six-month open-enrollment period.

Dominique Williams, a college student and part-time hair stylist, was among the uninsured who tried to apply for coverage at a community college in downtown Louisville. She left without having applied but set up an appointment to finish the process next week.

She said she had expected some first-day glitches, and said the prospect of gaining health coverage would lift a burden off her.

Williams, 39, has gone without health coverage since 2006. Since then, she’s relied on prayer and home remedies to deal with ailments, she said. Williams went to the emergency room once for a broken toe, and it took her four years to pay off the bill, she said.

After more than a year of preparation, Kentucky on Tuesday began the first phase of implementing the Kentucky Health Benefit Exchange the online guide to a variety of insurance policies. Gov. Steve Beshear, an unabashed supporter of the federal health care overhaul, said about 640,000 Kentuckians are uninsured in a state that ranks at or near the top nationally for a series of health problems.

“Today marks a sea change in the health of Kentuckians,” the governor said in a statement. “I’ve been looking forward to this day for a long time, and I’m excited for our friends, neighbors and coworkers to finally enjoy the peace of mind that comes from having affordable health insurance.”

Beshear has said four out of five Kentuckians will be eligible based on income cutoffs for federal subsidies ranging from less than $100 to more than $500 a month to help pay premiums.

Kentucky has promoted the new insurance offerings with an $11 million advertising campaign that began in June. Ads have been running on TV, on radio, on the Web and in newspapers. Lt. Gov. Jerry Abramson said Tuesday the promotions will continue.

“We’re going to blanket this in every way we can to be sure that folks get the information, take advantage of it, receive the coverage and ultimately sleep soundly at night,” he said at an event in Louisville marking the start of enrollment.

Tea Party activist David Adams, who has been sharply critical of Beshear’s decision to push ahead with implementation of the health care law, raised concerns Tuesday about privacy issues as people apply for the coverage. He said the premiums are “outrageous,” and that Beshear abused his authority in creating the exchange by executive order.

“You will see the service collapse under its own weight,” Adams said.