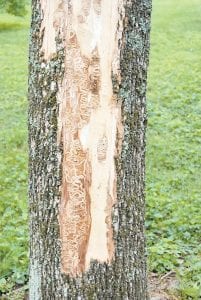 This photo shows winding tunnels beneath tree bark which are caused by the worm-like larval stages of the emerald ash borer, heavily damaging the ash tree. (Photo by Lee Townsend)

If you have driven along Highway 15 or US 23 lately, you have probably noticed the bright purple boxes hanging in trees along the highway. No, the boxes are not part of a fund-raiser for Letcher County’s Relay for Life or to show support for Fleming-Neon.

The boxes have gained quite a bit of interest in the last week from passersby wondering what purpose they serve.

Shad Baker, an agent with the Letcher County Extension Office, said between phone calls and Facebook comments he has received about 20 inquiries, which he says is a lot for one topic.

Baker, who helped hang the purple prisms from ash trees about 10 feet from the ground last week, said the prisms are to trap a destructive insect called the emerald ash borer.

Lee Townsend, extension entomologist in the University of Kentucky College of Agriculture, said the small, dark green metallic beetle has not been found in Letcher County. At least 6,000 traps are being placed in ash trees in Kentucky as part of a survey to see how far the insect has spread across the state. The project is funded by the U.S. Department of Agriculture Animal Plant Health Inspection Service and the U.S. Forest Service, with the Kentucky Office of the State Entomologist overseeing the installation of the traps. 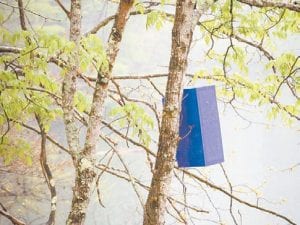 A two-foot long “purple prism” is seen hanging in an ash tree at Fishpond Lake. The devices are used to attract emerald ash borers. (Photo by Sally Barto)

Townsend said the traps are about two-feet long and are baited with an attractant to lure the borers if they are present in the area. Traps will not cause harm to humans, animals or trees.

Baker said the outside of the box is covered with a super sticky adhesive and asks people to not touch the prisms.

He said 50 to 75 purple boxes have been hung in Letcher County near parks, lumberyards and along major highways. Townsend said traps are placed in a grid pattern about 1.5 to 2 miles apart along the leading edge of the quarantine area established after the insect was discovered in the state. Twenty-one counties are under a quarantine including counties in north central Kentucky between Louisville, Lexington, Covington and Greenup County. Townsend said counties under quarantine cannot transport firewood out of the county. 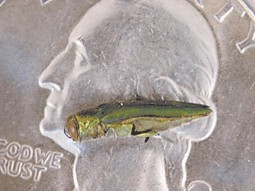 An adult emerald ash borer is pictured on a quarter to show the size of the insect. (Photo by Lee Townsend)

Traps will be taken down and examined in August after the emerald ash borer’s flight has ended.

Townsend said the beetle attacks all species of ash trees and adult borers feed on a tree’s leaves during May and June.

“The larvae burrow into the tree to feed under the bark from July through October, destroying the tree’s ability to transport water and nutrients,” said Townsend. “This can cause loss of the entire canopy and ultimately kill the tree within a year or two.”

Townsend said the insect was discovered in 2002 in Michigan and was thought to have been brought over from China in firewood.

“Since then it has spread and destroyed more than 40 million trees in 10 states and cost countless numbers of homeowners millions of dollars in tree removal and replacement,” said Townsend.

Townsend said about 500,000 ash trees are located in Letcher County. The county ranks 100 out of 120 counties in the number of ash trees.

“This will almost surely wipe out all of the ash trees unless they find a cure,” said Baker.

He compared the emerald ash borer to the southern pine beetle that destroyed thousands of acres of pine trees in the county in 2001.

“The insect bore underneath the bark and the tree would all of a sudden die,” said Baker.

Townsend said it takes about two years of infestation for a tree to die.

Baker said if people notice sprouts at the stump of a tree it is a sign that the tree is infested by the emerald ash borer.

If an emerald ash borer infestation is suspected, contact the USDA-APHIS Emerald Ash Borer Hotline at 866-322-4512 or the Kentucky Office of the State Entomologist at 859-257-5838.