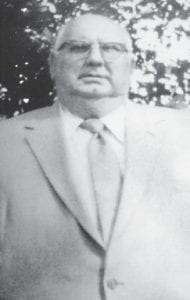 The late Bro. Robert ‘Buddy’ Wilson built the church where Whitesburg correspondent Oma Hatton has been going for many years. She says, “Some of the children and grandchildren still live near Whitco. We all remember him at Whitco Faith Pentecostal Tabernacle. He was pastor of the church till his death.”

Hello everyone. Hope you and your families are all doing well.

I can’t believe it’s time to write again. Can anyone tell me where the time has gone? Probably not, you are probably thinking the same thing.

My brother, John Howard, and I went to the Eolia Senior Citizens for the potluck dinner and singing. I surely enjoyed it.

Darrell Caudill, Bobby Bates and Jerry Banks sang and others whose names I can’t. I should have written down the names. They all sang so well, I could have stayed and listened to them all day.

The people were all so friendly with me and John. Everyone came and talked to me, even their site manager. She was so nice!

I will go again. I want that place to stay open. They need more people to come. Maybe they don’t have a way to get there.

We have had a lot of deaths in our area, Harold ‘Hoss’ Vermillion, and Pelma Dixon of Jenkins.

Pelma was such a sweet person and also beautiful. Her husband, the late Dennis Dixon, was my secondgrade teacher at Carcassonne. We called it Bull Creek then. We lived there in the house that Virgil Combs owned later before he died. He brought me to see it, and it brought back a lot of memories.

That’s been a long time ago; I was only seven years old then.

I kept up with Dennis Dixon all the rest of his life and visited him when he was in the Letcher Manor Nursing Home until his death. He said I could make him laugh. I always fussed at him for making me memorize ‘The Night Before Christmas,’ a very long poem.

My four sons will be coming home from the Bristol races. They will tell me about the good time they had. They love getting together.

I had a cousin, Anthony Wayne Howard, die last Friday in Dayton, Oh. He was a son of the late Ellis and Sylvester ‘Vess’ Howard. They had a daughter, Ellen, but I don’t know her last name. She had lived in Texas for many years, and she was buried there.

They also had a grandson, the little boy who was five years old who was killed in an accident with a little motorized vehicle.

So much sadness for the family. We certainly offer our sympathy to the family.

The 30-day revival is still going on and going well. There is a very large crowd every night with different preachers. Bro. Tim Allen of Isom will be preaching on Thursday, and he invites everyone.

It was good talking to cousin Carol Howard of Jeremiah the other day. I hadn’t talked with her in awhile.

I was real pleased to get a call from my Marlowe friend, Anna Watkins in Florida, last Friday. She also got to talk to my son, Rob. She knew him when he was a little boy. That pleased both of them.

We still have a lot of people who are sick, Shirley Niece, Bud Hatton and Jerry Dixon, and many more who need everyone’s prayers.

I think the flu has been going around. I hope when the weather gets better everyone will feel better.

This March has had everything — wind, rain, snow, and also some beautiful weather. That’s my favorite. I even got to do a little outside work. I’ve not been out much. Most of my talking has been the telephone.

I try to talk to my brothers and sisters. Some have health problems. My brother, Hubert Howard, had hip replacement, and has been having a lot of pain. Hopefully that will get better.

I do hope Emma Lou Engle is doing better. I don’t have her phone number or her address. I’ve only met her once, but I was impressed with her and I liked her.

May God bless all of you. Try to be in church somewhere if you are able.