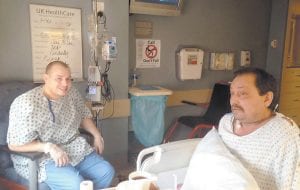 TRANSPLANT PATIENT MEETS DONOR — Andrew Rose, 26, of Wise, Virginia and Clancy Hensley, 47, of Eolia, talked to each other for the first time on January 30. Rose donated a kidney to Hensley on January 29 at the University of Kentucky Medical Center in Lexington.

Barbara Hensley knew that finding a kidney donor with an exact match for her 47-year-old husband Clancy Hensley would be a challenging task.

“The chance of finding an exact match that is not a family member is one in 100,000,” said Barbara Hensley, of Eolia.

Because of health conditions, Barbara Hensley said her family is unable to donate a kidney.

In May, Barbara Hensley, created a Facebook page in hopes of finding a potential donor after the Hensleys were advised by medical providers at the University of Kentucky Medical Center in Lexington to start looking for a living donor.

“A few people called and tried, but none of them could be a donor,” said Barbara Hensley.

While waiting for a kidney transplant, Clancy Hensley, a disabled truck driver, received nine hours of peritoneal dialysis during the night while he slept in addition to having dialysis at 4:30 p.m. and 7 p.m. each day at his home.

In August, Andrew Rose, 26, of Wise, Va., read Barbara Hensley’s plea for help on Facebook. “Please help give someone a new chance at life. Be a living donor. Our son needs his daddy.” 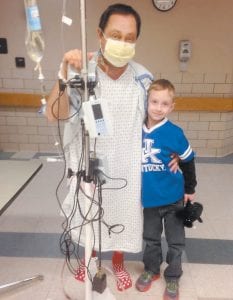 Clancy Hensley posed for this photograph with six-year-old son Dalton on February 2. Hensley, 47, defeated odds of one in 100,000 when a 26-year-old Wise, Virginia man had the exact match needed for a successful kidney transplant. Both men are now back at their homes.

Rose was eight years old when his father died.

“He lost his dad at such a young age and he didn’t want my son to go through that,” said Barbara Hensley, whose six-year-old son Dalton is in the first grade at Arlie Boggs Elementary School.

Several tests were performed on Rose including tissue typing, which identifies certain proteins in blood called antigens. To have an exact match, the donor and recipient must each have the same combination of six certain antigens.

The Hensleys found out in late October that Rose and Clancy Hensley have the exact match of those six certain antigens.

“(Rose) said he wasn’t doing it for fame or fortune,” said Barbara Hensley. “He was just doing what God led him to do.”

On December 15, Barbara Hensley posted on Facebook that her husband had an upper respiratory infection.

“He can’t eat and feels really bad,” said Barbara Hensley. “Also his dialysis isn’t working. It’s taking everything we have to just try to keep him comfortable and to take him to the doctor.”

“This has given him a whole new life,” said Barbara Hensley. “We’ve tried thanking (Rose) a thousand times and it would never be enough.”

Clancy Hensley had his first clinic checkup in Lexington on February 9.

“The kidney is working wonderfully,” said Barbara Hensley on February 9. “It was a perfect match.”

Clancy Hensley has another checkup on February 12. The Hensleys will travel to Lexington twice a week for a while in order for doctors to monitor his new kidney.

“They have to watch him very closely for the next year,” said Barbara Hensley.

This was Clancy Hensley’s third kidney transplant and Barbara Hensley said the surgery was more dangerous because the kidney is located in the middle of his stomach near the two failed kidneys.

Barbara Hensley said doctors told the Hensley family in 1992 during his second transplant that the donated kidney should function for about five years. Instead, the organ extended Clancy Hensley’s quality of life for 22 years.

Complications tend to be fewer with a living donor organ, according to the Mayo Clinic website.

Barbara Hensley said she and her husband are thankful for Rose and other organ donors.

“One donor can touch so many lives,” said Barbara Hensley. “You don’t have to wait until you are deceased to donate an organ.”

Barbara Hensley has set up a fundraising campaign, “Clancy Hensley travel expense for kidney,” on the website www.gofundme.com.

“We want to thank everyone who has helped,” said Barbara Hensley. “The support from the community has been wonderful.”