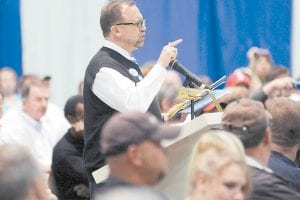 Bill Bissette with the Kentucky Coal Association spoke Tuesday night in Charleston, W.Va., at a public hearing of the Environmental Protection Agency concerning the Spruce Mine mountaintop removal permit that is currently facing a veto by the EPA. (AP Photo/The Logan Banner)

The venue was a public hearing on an EPA plan to veto a key water quality permit for St. Louis-based Arch Coal’s Spruce No. 1 mine. But hundreds of mining industry supporters and environmentalists broadened the discussion to Appalachian surface mining overall.

Under President Barack Obama, the EPA has adopted a policy designed to curtail surface mining by sharply reducing the practice of filling valleys with excess waste in a six-state region.

Though outnumbered and at times out-shouted, members of several regional environmental groups praised the EPA.

“Permits such as Spruce No. 1 bury streams,” said Stephanie Tyree, an organizer with the Ohio Valley Environmental Coalition. “And they demolish mountains as you all know but most importantly, Spruce No. 1 would harm people.”

Mining supporters countered that the EPA decision is hurting people, not protecting the environment.

Arch Coal’s John McDaniel said the company can’t justify investing in the Spruce mine if the EPA can reject the permit at any time.

“We believe all these issues were addressed long ago and are very disappointed.”

Tim Hopkins said his small drilling supply business would suffer. “I have been living the American dream,” he said. “My comment is let Arch Coal do what they do best and that’s mine coal.”

“Your director, Lisa Jackson, literally says I don’t care about the economic impact,” he said. “It’s unfair and it’s wrong. It’s an injustice.”

Debbie Thompson said her neighbor will lose his job at Spruce No. 1. “He won’t be able to pay his bills,” she said. “It will cause a domino effect.”

Logan County school superintendent Wilma Zigmond drew raucous applause when she told the panel that coal provides more than $7.5 million in property taxes for her district.

“Consider the losses, both financial and emotional, and the impact this would have on the Logan County school system,” she said. “Remember coal keeps the lights on and our schools running.”