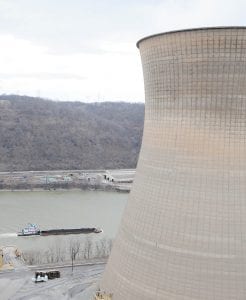 The Obama administration’s proposal last week to put the first limits on greenhouse gases from new power plants probably will mean that no new coal-fired U.S. plants will be built after this year, but that won’t slash coal use anytime soon.

The rules require future power plants to keep their emissions of heat-trapping gases under a limit. Most natural gas plants would meet the standard easily, but coalfi red plants would have to reduce emissions by about half. The equipment to capture and store those emissions underground isn’t commercially viable.

“This is not a sudden death for the coal industry by any means,” said David Pumphrey of the Center for Strategic and International Studies, a center-right research center. “I think there are a lot of people out there who are going to make sure it doesn’t work that way. But it says the future of coal is limited and probably isn’t going to grow more than it is now.”

Coal today accounts for about 40 percent of electric power generation, down from 45 percent in 2010. The Energy Department’s latest forecast figures that it will remain roughly the same through 2035. Part of that forecast saw new coal use increasing slowly after 2015. But that calculation was made before the Environmental Protection Agency announced the proposal for new plants March 26.

Kevin Book, the managing director for research at ClearView Energy Partners, said coal probably would retain its place as the biggest source of electricity in 2035, but barely. It remains to be seen whether natural gas surpasses coal or state laws continue to support an increase in renewable energy, he said.

It’s also likely that some older coal plants will be kept around longer than originally intended, Book said. “If you can’t build more, you’ll love the ones you have a lot longer.”

“I think the intent in the rule is to make the future of coal extremely problematic,” said Luke Popovich, the vice president for external communications at the National Mining Association. The plan essentially would make coal plants impossible until carbon capture and storage for part of their emissions becomes commercially available, and that’s likely to be more than a decade away, given the slow start on testing and deployment globally during the recession, he said.

Popovich and others expect the EPA to put greenhouse gas limits on existing power plants later, but they don’t anticipate that move until after the November elections.

The EPA’s long-term plan for existing plants, however, is no secret. The agency is operating under the terms of a consent agreement reached after states and environmental groups sued it to force it to reduce emissions from new and existing power plants and refineries.

Jeff Holmstead, an EPA air administrator under the George W. Bush administration who now represents companies that oppose greenhouse gas limits and other Obama administration pollution rules, said that even if the new rule survived in court, it was hard to know what it would mean for future coal use.

At least three plants that were planned won’t be able to be built now, Holmstead said.

Carbon capture and storage isn’t ready, and the storage part is the biggest challenge, Williams said. If scientists find a way to recycle the carbon dioxide instead of storing it underground, “that would be huge for coal.”

Scientists have been working on how carbon dioxide could be recycled as fuel and building materials, but while there have been laboratory breakthroughs, the work is far from commercial use.

While it’s hard to predict whether U.S. use of coal will remain stable or decline, the global use of coal is growing.

“We see an enormous market for coal building in Asia,” Popovich said.

Exports would help offset the impact of lower U.S. coal use, he said.

U. S. coal exports have increased over the past five years, even though there was a decline at the height of the recession. The U.S. also has a bigger market for coal in Europe, as other countries that traditionally have shipped coal there have shifted to Asia, Popovich said.