Epileptic seizures can be deadly, parents learn after death of boy 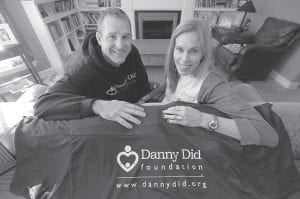 Michael and Mariann Stanton sit in the living room of their home with items that display the logo of the foundation they created to honor their late son Danny. (AP Photo)

Epilepsy takes as many as 50,000 lives each year — grim statistics Mike and Mariann Stanton hadn’t heard of until their 4-year-old son, Danny, became one of them.

Somehow, that horrible tragedy a year ago transformed a blissfully ordinary Chicago family into extraordinary activists. With zero experience but fueled by wrenching grief, their passionate advocacy has brought widespread attention to a rare, little-understood medical condition called Sudden Unexplained Death in Epilepsy, or SUDEP.

The Stantons want other families to know what they’d never been told — that epileptic seizures can be deadly.

They’ve put up billboards, created more than 8,000 informational SUDEP brochures for doctors’ offices, hospitals and families; held fundraising events to boost awareness and research dollars; and created a foundation that has garnered more than 10,000 Facebook followers. But their biggest coup is getting researchers at three major medical institutions in Chicago to launch the first-ever rigorous study of a monitoring device for detecting dangerous seizures during sleep, ideally before they turn deadly.

The study launches early in 2011. Even if it shows the device doesn’t work, Mike Stanton says their work won’t be done until epileptic seizures can be wiped out for good.

Dr. Doug Nordli of Children’s Memorial Hospital, who agreed to participate, called it “extraordinary” that a major study would be prompted by a family’s advocacy.

“You put yourself in the position of a parent who has lost a child, and I think you’re naturally sympathetic and want to help in whatever way you can,” Nordli said.

Before the tragedy, the Stantons were a family that inspired admiration and envy, with four adorable young children, dozens of devoted relatives and friends, and full lives punctuated by kickball games, pizza with neighbors and other kid-oriented things.

When Danny died in his sleep from a seizure two weeks before Christmas 2009, their lives could have been shattered. Their second-youngest was an irrepressible boy known throughout their close-knit neighborhood for his exuberant zest for life. Danny’s mere presence made people smile; the shock of his absence still shows in his parents’ sad eyes.

Last January, they created the Danny Did Foundation, after the poignant final words Mike wrote in Danny’s death notice: “Please go and enjoy your life. Danny did.” Mike’s younger brother, Tom Stanton, who has a background in public relations and volunteer work, serves as the nonprofi t’s executive director.

Both 40, these parents seem in awe of what they have created.

“Sometimes, I step back and I look at what we’ve done in 11 months with this,” said Mike Stanton, an investigator for the Cook County State’s Attorney’s Office. “What is it about this little boy that has created this enormous presence? He definitely keeps giving.”

More than 3 million Americans have epilepsy, recurrent seizures caused by electrical disturbances in the brain. About 40 percent have seizures hard to control with medicine. They face the highest SUDEP risk, although anyone with epilepsy is at risk.

SUDEP claims a reported 3,000 lives each year nationwide, but the actual toll is likely higher, said Dr. Elson So, a Mayo Clinic neurologist and leading SUDEP expert. He learned about the upcoming research on a seizure-detector from Chicago colleagues and has off ered to take part.

“Even if the impact of this device on the SUDEP risk is small, there should be other advantages from a device that detects seizures, in terms of knowing how frequently a patient is having seizures and also preventing injuries, if not death,” So said.

The Stantons learned about the device, used in Europe, after Danny died. It’s designed to sound an alarm if seizures are detected during sleep. That theoretically would give parents time to reposition their child to prevent choking, administer medicine and get help if needed.

Made by Emfit Ltd. of Finland, it features a plastic sensor sheet placed under a mattress, and a bedside monitoring device that together are designed to detect unusual movement that could indicate a seizure.

The $600 Emfit device is not approved by the U.S. Food and Drug Administration, but the Stantons initially wanted doctors to recommend it anyway, based on anecdotal yet unscientific reports that it works.

With help from the local Epilepsy Foundation chapter, they contacted several epilepsy experts including Dr. Marvin Rossi, a neurologist at Rush University Medical Center. He was hesitant but found the Stantons knowledgeable and committed — and they understood his skepticism.

“You may as well be promoting snake oil until we understand it better,” Rossi said. “What the Danny Did Foundation clearly helped me see is that there’s such a huge gap in the field that it’s worth setting up an initiative like this.”

With some of the nearly $300,000 they’ve raised, the Stantons bought and distributed Emfit monitors to more than 20 families unable to afford them. Emfit now gives the foundation $60 when people ordering monitors mention the Stantons — but all the money goes into foundation operations, Mike Stanton said. The foundation’s Facebook followers include a Chicago taxi driver who was touched by Danny’s story and staged a 1,000-mile fundraising bike ride around Lake Michigan.

Danny Stanton only had a handful of seizures, at night and always terrifying. For a long time, his parents had him sleep in their bed. They gave him recommended medicine, had him undergo brain wave tests, and were told he’d likely outgrow the problem.

Whether families of epilepsy patients should be told about SUDEP is a topic of “huge discussion” among doctors, said Dr. Stephan Schuele, a Northwestern University who also is participating in the research. The reason some don’t mention SUDEP is because it’s rare, and patients with well–controlled seizures are thought to face little risk. Also, Scheule noted, some people would prefer not to know every worst-case scenario.

Stanton knows his son might have died even with a monitor. But he feels he could have done so much more if he’d known death was a possibility, and that overwhelming sense of powerlessness eats away at him.

“We didn’t know what we were facing,” Stanton said in a tearful speech at last month at an Epilepsy Foundation of Chicago meeting. “That is difficult to accept and it is maddening.”

The Danny Did Foundation: www.dannydid. com