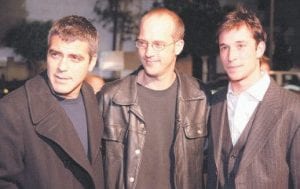 The people of “ER” are overburdened, sleep-deprived, comehell or-high-water healers. They save lives with the systematic scrambling of a deli filling orders during lunchtime rush.

They may rage against society’s ills, which account for many of their cases (the gunshot victims, the drug abusers, the destitute). They beef about pushed-to-thelimit facilities and staff at County General. But they soldier on.

“You can never think that you know what’s coming,” said Dr. John Carter on a recent episode when a documentary unit was interviewing him. “Because, when the rig rolls up and the doors pop open, you have no idea what’s inside.”

Oh, really? No idea? As a viewer watching this NBC drama in its 15th season, I feel like I’ve pretty much seen it all. Maybe Carter was channeling a vision of “ER” from long ago.

Carter and other long-gone characters have been popping up in recent months, thanks to cameo appearances by Noah Wyle (who plays him) and fellow “ER” alumni including Anthony Edwards, Sherry Stringfield, Julianna Margulies, Eriq La Salle and, of course, George Clooney. These sentimental encores have caused a spike in “ER” deja vu that already was overwhelming the show.

Granted, “ER” deserves some sort of credit for sticking around, encrusted at 10 p.m. Thursdays since its first week almost 15 years ago. (Its two-hour finale airs April 2 at 9 p.m., preceded by an hourlong retrospective.) Consider: “ER” arrived in September 1994, a distant time before people gave much thought to the Internet, al-Qaida or Bernie Madoff. Back then, no one was digging a mass grave for network television, and the fast success of “ER” helped revive NBC’s fortunes.

But enough with the tributes. I didn’t like “ER” from the night it premiered. The series put me off as cloying and frenetic with its first episode.

After 300-plus episodes, “ER” strikes me as all the more annoying for its longevity, which saw the formula transformed into cliche, with the show by now operating less from inspiration than from muscle memory.

But my main complaint (which, I realize, millions of others consider a virtue): “ER” has never really been the medical series it pretended to be, but something else. And not a procedural, either — or particularly characterdriven, which perhaps helps explain why it has weathered so many cast turnovers.

Instead, it’s a life-or-death action show that happens to be set in a hospital.

As I wrote shortly after “ER” debuted, the series revels in speed, focusing less on wellness than velocity: “It’s all hurry, hurry, hurry as ‘ER’ stays on the run, up this patient-stacked corridor and down that, with the Steadicam silkily chasing the action.”

A triumph of engineering, “ER” should recognize the Steadicam as its true enduring star.

“It’s gorgeously produced and exhilarating to watch,” I wrote. “But for a series so taken up with blood-and-guts, ‘ER’ is itself oddly bloodless.”

Granted, the action yields to speed bumps, when the characters’ mostly doleful personal lives are bared.

Over the years, the names and faces of the principals have changed, but this remains a longsuffering lot.

Dr. Greene’s marriage collapsed and he later died of brain cancer. Dr. Romano got his arm chopped off by a helicopter, then died when another helicopter fell on him. Physician’s Assistant Jeanie Boulet contracted HIV from her husband. Dr. Carter battled drug addiction.

The list goes on. Rocky relationships, disease and other narrative contrivances have plagued the characters to a degree that seems cruel even by the harsh standards of a TV melodrama.

And therein lurks the show’s implicit message: Only the damaged are fit to heal the sick. On “ER,” skill and dedication are punishable offenses.

“ER” has made the most (and way more) of its dizzying pace and its fetish for world-weary heroism. It’s been a spectacle of overkill with every passing season. I won’t miss it a bit.

Still, I take no satisfaction from the retreat signaled by its replacement next season: not another drama or some other stab at creativity, but an installment of the Jay Leno weeknight talk show. Too bad.

Clearly, network TV’s health crisis is real, with no recovery in sight. The end of “ER,” a series I’ve never liked, marks the end of a television era I already miss.