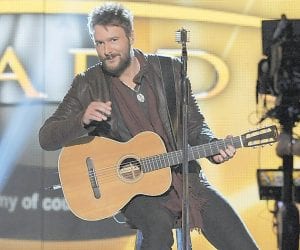 Eric Church will be playing his new single, the hard rock anthem “The Outsiders,” on Wednesday night during the Country Music Association Awards. (Photo by Chris Pizzello/Invision/AP)

Eric Church isn’t sure what reaction he’ll get when he plays his new single, the hard rock anthem “The Outsiders,” on Wednesday night during the Country Music Association Awards.

It’s the first time he’ll play the song in front of the Music Row “establishment” and millions of fans who don’t follow him, and he’ll be pushing mainstream country music’s edge quite a bit further than folks are used to.

“Could be crowd-surfing, could be mosh pits,” Church said. “They could be throwing cans at me.”

Few country songs will be so polarizing as the title cut and first single from Church’s fourth album, “The Outsiders.” Church sat down recently to talk about his new album, set for release Feb. 11, his upcoming CMA performance and the freedom he feels success has given him as he prepares to take the next step in his career.

Church’s last album, “Chief,” won the CMA and Academy of Country Music album of the year awards, sold 1.5 million copies and changed his career. The album’s success moved him from promising songwriter to arena-filling star. He did it by tapping into the growing hunger for hard rock sounds in country.

Instead of touring extensively this summer, the 36-year-old North Carolina native, who’s up for two CMA awards Wednesday, including male vocalist of the year, decided to focus on recording. He enlisted longtime producer Jay Joyce again and wrote 121 songs for consideration. They cut that down to the 11 or 12 that will appear on the new album, brought in Church’s band and started to bounce ideas off each other — not at all the way the typical country album is recorded.

“We’ve had the ability after every record to feel more emboldened by what we did on the last record,” Church said as he sat near a fire pit on his land in West Nashville with yellow jackets buzzing his Ray-Bans. “And I think with this one, with the success of ‘Chief,’ we were a little bulletproof.”

First up was “The Outsiders,” chosen for its invitation to fringe dwellers to join the circle. The Black Sabbath-influenced metal moments that mark the song’s mesmerizing last minute came during a jam with Church on Telecaster and resemble nothing you’ve heard on country radio.

“If you go past that, it’s a cliff,” Church said. “Sometimes I feel like we’re leaning over it.”

Some of the most striking moments would seem odd to your local program director. There’s a dark trilogy, for instance, that includes a dramatic recitation of the Shel Silverstein poem “The Devil and Billy Markham.” ‘’Roller Coaster Ride” actually feels just like one. And album-closer, “The Joint,” is an oddly affecting cross of Tom Waits and J.J. Cale.

At the same time, there are several cuts that would make that program director tap his foot. “Cold One” includes a hilarious twist, and there’s a run of three love songs in the middle of the album.