Eric Conn is captured, being returned to Ky.

By MARK STEVENSON and BRUCE SCHREINER
The Associated Press 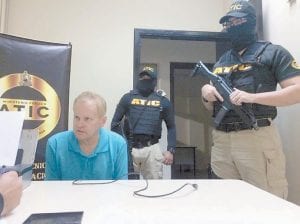 This photo provided by the Honduras public magistrate’s office shows Eric Conn with Technical Agency of Criminal Investigation (ATIC) agents after he was captured by police on Dec. 4 in the city of La Ceiba, Atlantida, Honduras. Conn, a fugitive Kentucky lawyer who escaped before facing sentencing for his central role in a massive Social Security fraud case, is being transferred to the U.S. (Honduras public magistrate’s office via AP)

A fugitive Kentucky lawyer who disappeared six months ago before facing a prison sentence for his central role in a massive Social Security fraud case has been captured in Honduras and will be returned to the U.S., officials said.

Eric Conn was captured Monday by a SWAT team as he came out of a restaurant in the coastal city of La Ceiba, the Honduras public magistrate’s office said in a news release. The office said the arrest was “the product of arduous intelligence, surveillance and tailing by the agents.”

The flamboyant attorney had been on home detention while awaiting sentencing, but he disappeared while in Lexington at the permission of federal authorities to meet with his attorney and prosecutors.

Conn pleaded guilty in March to stealing from the federal government and bribing a judge in a more than $500 million Social Security fraud case. His sentencing went on without him last summer, when he was given a 12-year prison term — the maximum possible.

The FBI office in Louisville, Kentucky, did not confirm the arrest Monday.

Conn’s lawyer, Scott White, said he had not been given any official information regarding Conn’s capture.

“If in fact Eric has been lawfully captured and is legally returned, then … this comes as no surprise … the FBI usually gets their man,” White said in a statement.

Conn is expected to be transferred to the U.S. on Tuesday, according to the Honduran public magistrate’s office.

A photo of Conn distributed by the office shows him with close-cropped, reddish-gray hair and a blue polo shirt sitting at a table, with police agents wearing ballistic vests and carrying assault rifles behind him.

Conn, who started his law practice in a trailer in 1993, had portrayed himself as “Mr. Social Security.” He fueled that persona with outlandish TV commercials and small-scale replicas of the Statue of Liberty and the Lincoln Memorial at his office in eastern Kentucky.

Conn represented thousands in successful claims for Social Security benefits. Most of his clients in the impoverished coalfields of eastern Kentucky and West Virginia had to fight to try to keep their disability checks.

His empire crumbled when authorities discovered he had been bribing a doctor and judge to approve disability claims based on fake medical evidence.

“With his capture, I’m hoping we can get this ordeal behind us, put him in prison where he belongs and start to undo the damage he has done to his former clients,” Pillersdorf said in a phone interview Monday night.

As part of the fallout from Conn’s downfall, the Social Security Administration identified about 1,500 beneficiaries, mostly in eastern Kentucky, who could receive hearings to determine if their benefits should be reinstated, he said. The agency decided not to cut off those payments during that process after Republican U.S. Rep. Hal Rogers interceded.

Now, those hearings are nearly complete, and so far about 800 have lost their benefits, Pillersdorf said.

In an email exchange months ago with the Lexington Herald-Leader, a person claiming to be Conn said he fled the U.S. using a fake passport.

As the mystery of his whereabouts continued, the FBI released two photos that it said showed Conn buying food and water at a gas station in New Mexico and pushing a bike at a Walmart, also in New Mexico.

Federal authorities claim Conn had help in carrying out the escape plot.

An indictment unsealed in October alleged that one of Conn’s employees opened a bank account that Conn used to transfer money.

It also claimed that the employee, Curtis Lee Wyatt, tested security at the U.S.-Mexico border at Conn’s direction, and that he allegedly purchased a pickup truck for use in Conn’s escape.

The indictment charged Wyatt with aiding in Conn’s escape and abetting Conn’s failure to appear. Wyatt pleaded not guilty to charges.

The indictment tacked on escape and failure to appear charges against Conn.

It claims that Conn hatched his escape plot around June 2016, two months after he was first indicted and a year before his disappearance.

In his escape, Conn put his electronic ankle monitor inside a pouch with a metallic lining meant to suppress electronic signals, authorities said.