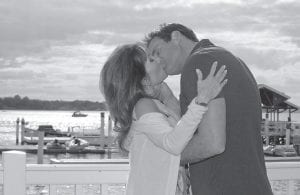 Susan Lucci’s memorable “All My Children” character is about to become TV’s Ultimate Cougar.

The conniving Erica Kane, with 10 husbands down already, will fall into the arms of a much younger man on ABC’s soap opera this summer. To make life a little more complicated, it’s her daughter’s ex-husband and exfiance’s stepson.

Cable’s TV Land just wrapped up “The Cougar,” a reality series featuring a 40-year-old blond mother of four with salivating 20- somethings competing for her hand. ABC is prepping the comedy “Cougar Town” for the fall, with former “Friends” star Courteney Cox re-entering the dating world. On CBS’ “Accidentally on Purpose,” Jenna Elfman has a baby with a slacker she picked up for a one-night stand.

“Certainly the fact that it is a hot topic right now makes it all that more delicious for us,” said “All My Children” executive producer Julie Hanan Carruthers. “It doesn’t mean that that is how we’re going to tell the story.”

And it’s hard to find a TV character with a richer history. Kane has lived a lot since arriving in fictional Pine Valley in 1970, with a drug addiction, time in prison, a stolen embryo, a rape that resulted in a daughter, a stabbing of Husband No. 8 and many, many manipulations.

She reached double figures in husbands just two years ago.

While Demi Moore may seem the prototype cougar these days, Lucci’s frame of reference leads her to Anne Bancroft’s Mrs. Robinson and her famous seduction of Dustin Hoffman in “The Graduate.”

In the relationship with Ryan Lavery, “I’m sure people would expect it to be the kind of story line where Erica was manipulating things,” Lucci said. “But there’s been zero of that.”

Those involved say the idea came from the audience.

Carruthers said Lucci, 62, and the 39-year-old Cameron Mathison, who plays Ryan, have a good comic chemistry and writers were looking for a way to feature them more, although not necessarily as romantic partners. Ryan was once married to Kendall, the girl Kane gave birth to after being raped at age 14.

Erica and Ryan went on a business trip together in episodes early this spring. Their car broke down, they found a cabin in the woods, they drew separate baths and, when Erica climbed on Ryan’s shoulders searching for better cell phone reception, she slipped and fell into his arms.

Viewers noticed the chemistry and writers decided to capitalize on it.

June 22, when he kisses her on the cheek, is the first “butterfly moment,” Carruthers said.

She believes the story will mean more to viewers than other TV cougar stories simply because it’s been nearly 40 years of Lucci’s character.

“Everyone watching the show has a sense of her vulnerability, her strength, her eccentricities,” she said. “They’ve gotten to know Ryan just as well. So there’s a lot more to it than just, ‘oh, my God she wants a younger man’ or ‘oh, my God, he wants an older woman.”

How much older? Don’t ask. They don’t tell ages on soap operas.

Mathison said he’s excited, not intimidated, by the story.

“Think about this,” Lucci said. “I slept with his father. He slept with my daughter. There has to be, at a certain point, (thoughts of ) what does he know about me? What does he think he knows about me? As an actor, there’s so much material to plumb into.”

After those first pecks on the cheek, how much longer until the Big Moment?

Remember. This is daytime television.