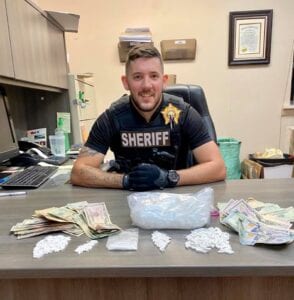 An Ermine man has been charged with trafficking in a controlled substance after a Letcher County Sheriff’s Deputy found approximately a pound of methamphetamine in the backseat of his pickup truck, Sheriff Mickey Stines said.
Stines said Norris was patrolling on US 119 North toward Mayking when he saw a yellow Dodge pickup with the light out on its license plate.
When he attempted to pull the vehicle over, the driver accelerated, leading Norris on a chase up Millstone before jumping out of the truck and fleeing on foot, Norris said in a citation. He said he chased the man across a yard before the man stopped and lay down on his stomach.
Upon searching the vehicle, Norris found 1.12 pounds of a substance believed to be meth, more than 250 Xanax pills, and $4,000 in cash.
Norris charged Kenneth Fisher, 46, of Ermine with second-degree fleeing or evading police (motor vehicle), second-degree fleeing or evading (on foot), Trafficking in a controlled substance, (first offense, methamphetamine) and license place not legible.
He was also wanted on two warrants in Pike County for trafficking in methamphetamine, bail jumping and tampering with physical.
Police are still looking for a woman who jumped out of the truck and ran when it stopped once during the chase.