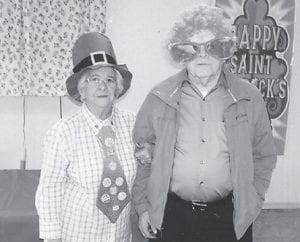 Hi to all you senior citizens out there. Glad to talk to you again.

I’ve been told by several of you that you miss my news, but we haven’t been doing too much. I guess because of the bad weather we’ve had. We’ll get back in the groove as these recycled teenagers are on the go.

Last week we went to Kingscreek Center for March Madness. There were 14 of us and four of our workers. We had a wonderful time. Amber painted ‘UK’ on our faces. I didn’t want to wash my face and take it off. (Oh well, I did) She did a great job. Amber also painted a large banner with UK and a wildcat on it. It was beautiful.

We had a good lunch and gifts were given away. Our own senior citizen Lorraine Kuracka won the gift that came from Ermine Center. Then on the van and back home.

Say Betty Pike, when are you going to beat Jim at the Wii game? You probably can beat Bob too.

Last Thursday was St. Patrick’s Day and what a party we had. We had 52 seniors, maybe more. I think some didn’t sign their name. We had a ‘Mr. and Mrs. Leprechaun’ and S.T. Wright and Helen Bentley were the winners. They each received a gift and a $10 gift certificate we bought at Walmart. Janice won the door prize. It was a beautiful basket of flowers donated by Whitesburg Florist. Thanks, girls, we really appreciated them. 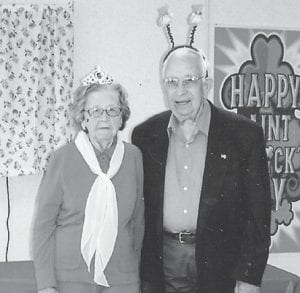 MR. AND MRS. LEPRECHAUN from the Ermine Senior Citizens Center are S.T. Wright and Helen Bentley.

Ed Pike won a gift, Sharon Amburgey, Bob Mayhew, Andrew Sexton, and believe it or not, but Lorraine Kuracka won a gift too. She sure is lucky.

We also had our potluck dinner and, boy, what a dinner. I believe our seniors are the best cooks in Kentucky. Also, Community Trust Bank sent us a beautiful cake decorated with a leprechaun and UK on it. It was as good as it was beautiful. 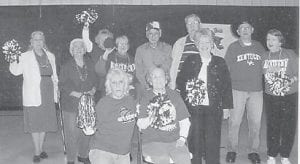 Our next party will be the Easter party, so you guys and gals, get out your Easter duds, and, ladies, dress up in your hats and try to win for having the prettiest one.

We may have something else planned, but I won’t tell until later. We play Bingo on Tuesdays and Thursdays.

Everyone stay good and pretty. God bless until next time.