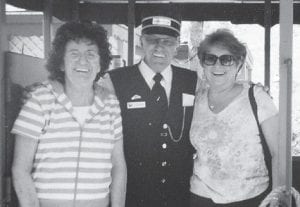 ALL ABOARD – Louise Shepherd and Nanetta Dingus are pictured having fun with a conductor at Dollywood.

Hello, everyone. Hope you are all doing well. I was freezing Friday. It was 54 degrees.

I got a call from one of our Marlowe girls, Jolinda (Taylor) Sturgill. She was visiting her mother-in-law, Coleda Sturgill of Pert Creek, who has had eye surgery and is doing better but needs everyone’s prayers. Jolinda’s son, Jimmy Sturgill, is working in Pittsburgh, Penn., in heavy equipment, doing well. Her sister, Sharon’s, first grandchild is graduating high school, and one of her daughters has been in Iraq and will be going back in August. It seems like Sharon was a little girl in Marlowe such a short time ago. Jolinda and Sharon are living in Tiffin, Ohio, now. See how much you can learn in a few minutes on the phone.

It was good seeing my niece, Margaret (Hatton) Combs, in the grocery store, and also Dorthy Tackett and her daughter, Deloris Holbrook. Dorthy and her sister, Pearl Noble, and husband Charles had been to see Coy Morton in Hazard at the VA Veterans Home and he was doing pretty well. I think he’ll be visiting Dorthy this week. I hope I get to see him. He’s a longtime friend. 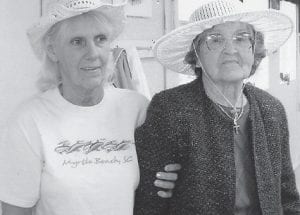 MEDAL WINNER – Pictured are (left to right) Lydia Hall and Ruby Caudill of Thornton. Mrs. Caudill is 94 years old and recently won a medal in walking at the Senior Games in Hazard, as well as an award for being the oldest woman in attendance at the games.

At the Ermine Senior Citizens Center, they were getting ready for a big Hawaiian party. They were dressed in pretty hats and leis and were all excited. Everyone loves a party and good food.

Louise Shepherd and her friend, Nanetta Dingus, went to Dollywood for a few days and really enjoyed themselves.

James Coplinger of Dayton, Ohio, has been visiting Hubert and Joyce Howard. I think the men enjoyed some golfing while he was here.

We offer our sympathy to the ones who have lost loved ones, Carolyn (Ison) Gilliam, who had been sick a long time, and Bennen Sexton, who was a resident of Letcher Manor.

Judy Greene, our little sister of Somerset, had a birthday May 20. Kevin Day had one May 17. These birthdays seem to come fast. Happy birthday.

I enjoyed the church service on Thursday at Camp Branch, where Bro. Gerald Hall is pastor.

Another election is here. I hope the best man wins.

Someone made a mistake in last week’s paper. It was Rickey Mason and his son, Blake, who cut Dorthy Tackett’s grass, not Rickey Maggard. We all make mistakes sometimes, don’t we? Sorry.

I enjoyed having my son, Astor, and Rosemary over the weekend. He met some people he knew at Letcher Manor, Joy Wray Breeding, Joyce Frazier, and I don’t know how many more. I met one new reader of the Eagle, Christine Simpson of Dayton, Ohio. She saw Clyde’s name on the door and as I came out, she asked if I was Oma Hatton. I admitted I was and we started talking. I think she said she lived at Premium and we knew some of the same people, the late Bill Profitt’s family. She had her daughter with her. They had a relative there. She wished her mother would move back here; I think she liked it here. They said they like to read Rose Ballard Durham’s news. She said she wrote a letter to her asking about words to the song about Ellen Flannery, who was killed many years ago.

Clyde was glad to have Bob Caudill and Chalmer Craft visit him, and also Lizzie Mae Wright and Bill Blair. All the folks up there love to have visitors. I enjoy it also when I’m there.

Louise Shepherd and I enjoyed church on Saturday night at Cowan Chapel. My grandson, Chris Hatton, and wife Sara and their friend, Cecelia Breeding, sure did some pretty singing and also all the others who sang. We’ll probably go back when we can.

May God bless all of you and try to go to church somewhere this week. You will always hear something good and your friends will be glad to see you.

“Hello from the Ermine Center. We are so proud of all Letcher County senior citizens. This year our seniors brought home more than 70 medals from the Kentucky Senior Games held in Hazard.

“The Ermine vans were full of medals on the way home Thursday. We brought home 30 medals. Ruby Caudill of Thornton, won the award for being the oldest senior citizen in attendance. Mrs. Ruby is 94 years old. She walked one-fourth mile in the walking category and won.

“The Ermine seniors said this were the best senior games KRADD has hosted. It was great to see Letcher County seniors do so well this year.

“Charles Day was not going to miss the games this year. He went in the hospital on Monday, was released on Wednesday, and won a medal on Thursday. Way to go, Charles Day.

“Our trip to the Hospice Memorial in the park was rained out last week, but we attended the Jenkins Arts and Crafts Festival Friday. Our own Judith Vermillion and her daughter, Luann Vermillion, had a booth at the festival. The Ermine seniors had to stop for milkshakes at Hardee’s on the way home. Rhuford Hart sure enjoyed milkshake.

“We had several Ermine seniors out sick last week. Charles Day was in the hospital, but was released. Jenetta Cook was in the hospital; she has three fractured vertebrae in her back. Monroe Pack was admitted to the hospital. Dorothy York had been in the hospital but is back home now. Gracie Wynn, Normia Toler, Josephine Spangler, and Jim Craft all have been sick. Ralph Collier had eye surgery. Betty Newman did well with her sinus surgery, but now is recovering from shingles.

“This week’s activities at the Ermine Center include guest speaker day (topic is lungs), Wednesday; bingo day, Thursday; and potluck with grilled hot dogs and all the fixings and desserts, Friday. Also, Hospice will be with us on Friday to discuss grieving. Monday, May 28, the center will be closed in observance of Memorial Day.

“The Ermine staff is working on the annual Grandparents’ Day. It is scheduled for Friday, June 29. Anyone interested in donating items for children, contact Angie at 633-4054.

“Also, our senior prom is around the corner. It is scheduled for May 31. For more information, contact any senior citizens center.

“Until next time, pray for us and we will pray for you. Love and prayers.”