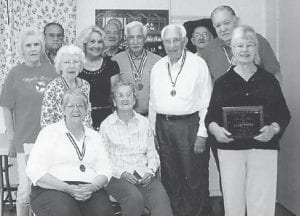 Last week Ermine seniors had a full week of fun.

Monday, Debbie Pennington was there until 11 a.m. We had a great time with her.

Tuesday the County Judge, Jim Ward, was with us for the signing of the proclamation for Elder Abuse Awareness Month for May.

After lunch we had Bingo, and we had about 15 gifts to give away. (I didn’t win, but I wanted to.)

Wednesday, some quilted and some talked (what I do best), and some did nothing at all.

I didn’t win any, brought I brought two home with me. Wasn’t that nice for someone to give me their medals they won? I thought so. 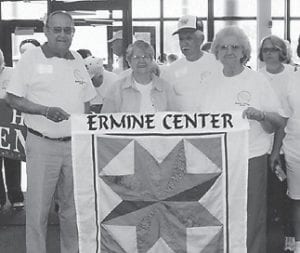 AT THE GAMES — Lennon and Yvonne Hammock carried the banner for th2e Ermine Senior Citizens Center at the Senior Games.

Janice Foster received a plaque for walking the most miles. Ruby won for being the oldest one there.

Anna Smith won a medal being the best grandmother. She won all over the state of Kentucky, and she will received $500 later, when they have another date to give her award and her check. Anna, we were all proud of you.

Coming back from the games, we stopped at the Amish Store and bought goodies. We came on up to Isom and stopped at the Dairy Bar for milkshakes and ice cream.

So you see, we had a great week and lots of fun.

Friday is our Memorial Day picnic at Fishpond Lake. Come on all our senior citizens, and let’s eat hamburgers and hot dogs.

One of our good seniors is furnishing the meat. We have some great seniors to work with. We all come up with our part.

Wednesday, May 25, we are going to the new high school to the drama. It’s the ‘Wizard of Oz’ and that will be fun.

Brandon, one of our workers, is cleaning out the flowerbeds. They are looking nice. We need to get some more flowers for them, as some of ours have disappeared out of the flowerbeds.

Wonder how that happened? Oh well! Enjoy them.

I almost forgot to tell you who carried our banner at the senior games. It was Lennon and Yvonne Hammock. Judith Vermillion made it for us.

Judith, you did a great job. It sure was beautiful.

See you all at the picnic. God bless until next time.