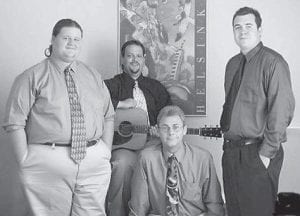 TO PERFORM – Ernie Thacker and Route 23 will perform on 88.7 WMMT’s “Bluegrass Express Live” on Thursday, May 8, and live on WMMT.

Ernie Thacker and Route 23, Pincastle Record artists, will perform on 88.7 WMMT’s “Bluegrass Express Live” on Thursday, May 8, in the Appalshop Theater in downtown Whitesburg and live on WMMT. The theater is located at 91 Madison Ave, and the performance will begin at 7:30 p.m. Tickets are $15 for adults, and $5 for students. For reservations, call (606) 633-0108 or email wmmtfm@appalshop.org.

Ernie Thacker played for six years with Ralph Stanley and the Clinch Mountain Boys. and appeared on the Grammy-nominated “The Stanley Tradition” and its IBMA award winning successor “The Stanley Gospel Tradition”.

Ernie Thacker and Route 23’s were among the top 20 nominees for the IBMA’s Emerging Artist Of The Year Award for 1999 and 2000. The group has appeared in every season of the Bean Blossom Festivals.