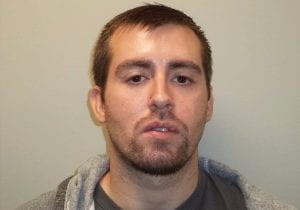 As of press time late Tuesday night, police were in Letcher County still searching for escaped prisoner Joshua L. New, 39, who left while on a work detail near the Leslie- Perry County line, only a short distance from Letcher County. See story above right.

Members of the Letcher County Sheriff ’s Department were in Ulvah Tuesday searching on foot for a prisoner who escaped from a Leslie County Jail work release detail and attempted to break into a home on Watts Drive.

Sgt. Alisha Congleton and Capt. Barry Engle said they saw the escapee on the opposite riverbank, between the river and the railroad, but were unable to cross because of high water.

The prisoner is Joshua L. New, 39, who was working on a work detail near the Leslie-Perry County line, only a short distance from Letcher County.

New is 5-feet-9-inches tall and weighs 115 pounds and has brown eyes and brown hair. He was last seen wearing prison-stripe pants and a neon yellow shirt.

New is a state prisoner serving his sentence in the Leslie County Detention Center. He was convicted of two counts of first-degree promoting contraband in 2016, and was denied parole in August. He was due to serve out his sentence and be released in a month.

Kentucky State Police took over the search later on Tuesday.