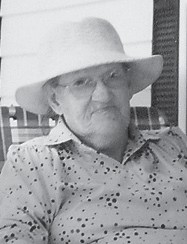 Esma Sexton Gibson, 93, died November 17 at her home at Colson.

A daughter of the late Hasadore and Elizabeth Sexton, she was the widow of Norwood Gibson.

Surviving are a daughter,

Funeral services for Mrs. Gibson were held November 20 at Letcher Funeral in Whitesburg. Burial was in the Gibson family cemetery at Colson.