ESPN analyst likes what he sees at UK

Can John Calipari really be less demanding on his players this year as he says he will be because of the team’s lack of experience and maturity?

From what ESPN analyst Seth Greenberg saw when he watched two Kentucky practices last month, he thinks the UK coach can do exactly that.

“He still has to be extremely demanding in effort and detail,” said Greenberg. “This team will make mistakes. They are going to be making decisions on the run. We saw that in practice. But he will be more patient with this team. There is a peace about him now.

“He has always been driven and so passionate about his coaching. He has an inner peace, and I am happy he does. He just can’t drive himself like he has been. He is so demanding on himself. People see how tough he is on guys, but he can do that because he has their backs and the relationship he has with kids is real.”

Greenberg, the former head coach at South Florida and Virginia Tech, offered a variety of other insights on Calipari’s Wildcats. 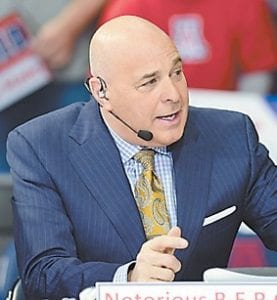 — He saw no “lazy leg” from senior Alex Poythress, who missed most of last season after tearing his knee ligament and needing surgery.

“He had that bounce he had before. I think he is actually healthier than his mind is now. Once his mind gets healthy in terms of trusting that leg, he’ll be fine. He showed signs of doing ridiculously explosive things,” Greenberg said.

The analyst noted that UK had some “dysfunction” in Poythress’s first year when UK went to the NIT. In Poythress’s sophomore season, Calipari moved him to small forward. Last year he was destined for a “significant” role before he got hurt.

“Now he is playing his more natural position (power forward). He is such a tough matchup. He runs the court, gets to the glass, is strong enough to defend, can attack in transition and shoots well enough to keep the defense honest,” Greenberg said. “I expect him to have a special season. Once he gets back to going on instinct, he can do the same freakish things he has in the past.”

— Greenberg believes junior Derek Willis has a chance to be in Calipari’s playing rotation.

“He has to take care of the basketball and show he can make shots,” Greenberg said. “He understands where he belongs and how he can help the team be successful, and if he approaches it that way he can play against the zone. He has the size and range to shoot it against the zone.”

— Freshman guard Charles Matthews was the biggest surprise to Greenberg.

“I was very impressed. He is different than some other guys and brings a different dimension. He’s going to be a big part of what they do. He gives them high energy, a lock-down defender and an electric body. I think he’s very valuable.”

— Junior Marcus Lee still needs to understand not only how good he can be, but how good he is.

“He has to be consistent and understand that it is his time and that he is ready to be an impact player and help be a winning player. That is really important for this team,” Greenberg said. “He has to fly around and do the things that he can do and not worry if he makes a mistake.”

— Freshman Skal Labissiere should show improvement weekly based on how Greenberg saw him improve from the first practice to the second one after listening to UK’s coaches.

“He has great elevation on his shot and his post scoring moves are very good,” the ESPN analyst said. “He could be a terrific, outstanding defensive player off the ball and ball screens. He is not Karl-Anthony Towns. He won’t be good just as a sit on the block guy. That’s not who he is. He will be a good cutter and as the season goes along he will be able to score on the low block.

“He and Marcus (Lee) can play together, but that probably would not be in their best interest. Skal is so skilled offensively and can do a lot of different things. He can help extend the defense and will give you multiple guys to protect the rim.

“Probably the biggest surprise to me was how good Tyler Ulis was. He was the best player in the gym two days in a row,” Greenberg said. “He’s an elite point guard and can also really put pressure on the ball.

“I think Jamal Murray will look to Tyler, but he has to remain aggressive. Even with the ball in Tyler’s hands, he has to make shots for Kentucky. I think he can be outstanding. He can really shoot the ball and Tyler will get him the ball where he needs it.”

— Defending the low post early will likely be a problem for Kentucky.

“I expect Cal to extend the defense and be more aggressive,” Greenberg said. “The freshmen perimeter guys are tough guys and will fight through screens and stuff. John wants to make you shoot contested shots. He’s really, really good at that. He has to decide how to guard ball screens. He has agile bigs and I think they will eventually be a very good defensive team again.”

“It’s going to be so hard to keep Murray, Briscoe and Ulis out of the lane and Alex off the glass that teams are going to go zone,” Greenberg said. “I think Cal will let them play faster and a little simpler. He’ll let the guards play on instinct more. You just don’t make shots against zones. You can’t just settle for shots. You have to get the shots you want, get to the glass, get in the lane. They have enough big targets to do that and just like on defense, I think they’ll eventually be really good against any type of defense.”

Coming back from last year’s knee surgery is not the first ad- versity that Kentucky junior Alex Poythress has had to overcome.

When he was 5 or 6 years old, he almost drowned in a neighbor’s swimming pool.

“I was at a neighbor’s house swimming and the next thing I knew I woke up in the hospital,” Poythress said. “I don’t remember much about that. It did scare my mom, but it’s fine now. No problems at all.”

Guess what he did the next year after almost drowing? He took swimming lessons and learned how to swim because he thought that was the right thing to do.

“I just knew I had to learn how to swim. I swim now, so no problem,” he said.

Poythress won’t bring up his near drowning unless someone asks him.

“I don’t talk about it, but it shows my knee injury was not the end of the world,” Poythress said. “It is just great to be back on the court. It was a humbling experience to have the game taken from you. It takes time to come back. You have got to do rehab, get there mentally and be confident the leg is not going to mess up and trust it again.”

And how much trust does he have?

“I have a lot of trust. That is what the rehab process was for was to build trust,” he said.

He was speaking for many of us

I think Cats’ Pause editor Darrell Bird was speaking for all Kentucky fans with this tweet he had on Twitter late in last week’s 52- 21 loss to Tennessee: “Kentucky needs to turn its clocks so far back tonight that this game never happened. Call it Season Savings Time.”

Kentucky’s season seemed so promising after wins over South Carolina and Missouri around a close loss to Florida. But the last two weeks coach Mark Stoops’s team has been awful in all phases in losses to Mississippi State and Tennessee.

I think Stoops was the most upset I have seen him in three years at Kentucky after the Tennessee loss, not only with the execution but also the effort — or lack of effort.

Quarterback Patrick Towles — remember he predicted before the season that UK could play for the SEC title this year — didn’t mince words about the loss to the Vols.

“We are all upset. Nobody is happy. Getting your ass kicked sucks. There is no way around it. We are a bunch of men and we have to get better,” Towles said.

Georgia has not lived up to its preseason hype and has struggled offensively. Yet the Bulldogs opened as a 16-point favorite this week and another blowout loss would be a huge setback.

Still, recruiting may not suffer the way some worry. Florida junior quarterback Mac Jones indicated on Twitter over the weekend he “was 100% committed to Kentucky” and how he believed in the future. Woodford County four-star offensive lineman Drake Jackson also went on Twitter with this tweet: “#BBN keep the faith. The #B16BlueNation isn’t going anywhere. It’s going to take time, but we’re willing to put the work in. #StoopsTroops.” Ohio senior defensive tackle Kordell Looney tweeted, “Somebody just asked me was I still all in with UK and I told them #BBN for life.”

Kentucky lost six straight games to end last year after starting 5-1 to miss a bowl bid. Now UK has gone from 4-1 to 4-4. Quarterback Patrick Towles insists there won’t be a collapse to match last year’s finish.

“We are a tight-knit family, we can’t point fingers,” Towles said. “It’s not one person’s fault, it’s everyone’s fault. We’ll go down to Georgia and give them all we’ve got.”

One just wonders if that will be enough.

I enjoyed hearing from Joseph Fats, who reads this column in the Bourbon County Citizen.

“After reading your first few articles, I really enjoy your writing style and approach. With your recent article ‘Teammates love Skal,’, you share the human side of these young and gifted athletes. Too often we ‘UK basketball fanatics’ fail to appreciate that these are young 17, 18, 19 year old kids. Few of us could handle the pressure and spotlight that these young men will be subjected to,” Fast said.

If you have a comment, suggestion or criticism, let me know at larryvau@gmail.com or on Twitter at @vaughtsviews.