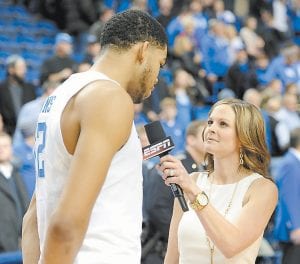 Shannon Spake likes the passion of Kentucky basketball fans and appreciates the way fans, coaches and players at Kentucky treat her while she’s doing her job. (Photo by Vicky Graff )

During the last few years, Kentucky basketball fans have gotten to know ESPN reporter Shannon Spake very well and have embraced her to the point that they sometimes feel like she is part of the Big Blue Nation.

How does Spake feel about that?

“I love that. There is something unique about Kentucky fans,” said Spake. “Their passion, there is nothing like it. I understood that a little bit more this last season. Two years ago I was part of that incredible run (38-0 start). I was with the guys during the entire (NCAA) tourney. I saw how fans turned out for practices and games.

“This year Kentucky was not in the tournament long and you would see empty seats at venues. That’s when you realize the impact of Big Blue Nation.”

When she covers a game at Rupp Arena, her press row seat normally is directly in front of the E-Rupp-tion Zone where the UK students are.

“I love sitting there. Those kids are awesome and they are so great when I bring my kids with me to a game,” Spake said. “I love being accepted by Big Blue Nation and being part of it myself.”

Spake’s personality and professionalism often open doors for special story ideas. One came when she watched the Cats work out during their early morning Breakfast Club last season. Originally I thought she was going to make players like Jamal Murray, Tyler Ulis and Isaiah Briscoe go through the type of workouts she does that got her ready for a 70.3- mile Ironman in Raleigh, N.C., last Sunday, that she finished in 6 hours, 43 minutes.

“I didn’t want an old lady to show up 19-year-old guys,” Spake laughed and said. “Seriously, I just happened to be in town for a piece I was doing with Isaac Humphries playing the piano and singing and that was such a powerful moment being in the room with him.

“I asked if I could be part of the Breakfast Club and they agreed. When you have a situation like Kentucky with so many new players and new dynamics ever season, every bit of time spent together without coaches has got to help with team chemistry.” 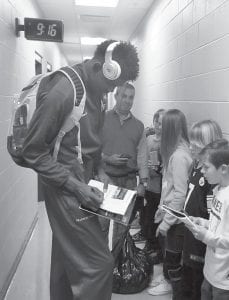 DeAndre Ayton says the attention that comes with being one of the top players in the 2017 recruiting class will not distract him. (Larry Vaught/Verizon Photo)

Spake says she “loves the best story” at games even if the underdog wins. However, she admits she was hoping Kentucky would complete a 40-0 season and win the national title in 2015 when it lost to Wisconsin.

“I was along for that great ride. I was totally invested and thought it would be a really cool story to see Kentucky win the championship,” she said. “I think I saw my kids three days that whole month of March.”

She had a special moment last season when UK played at Tennessee. She said UK Athletics photographer Chet White always “is so great” taking pictures of her twin sons when she has one of them with her at games.

“I don’t bring them when I do football, but when I do basketball games, the schools have been great. They find me babysitters and get tickets to the games,” she said. “During pregame I was talking to Tyler (Ulis) and my son just walked up with a ball. Chet got a great photo and I told my son one day I hope he grows up with the fight and tenacity that Tyler Ulis has.

“The previous season Willie (Cauley-Stein) was talking to my other son and Chet got a photo. Willie adored kids. He always was asking me about my kids. I went to a Charlotte Hornets game (this season) and saw Aaron Harrison (play) and felt like a proud momma.”

No Blow to UK

Kentucky fans were disappointed when five-star center Marques Bolden picked Duke over Kentucky recently even though some recruiting services still have UK with the No. 1 recruiting class.

“Although I like Bolden a lot and think he is a useful player, I never thought it was urgent for Kentucky to get him. He would have made the Wildcats a better team, as he will make Duke better,” DeCourcy said. “But UK has a lot of frontcourt players. If they don’t excel next season, it won’t be for lack of size or depth.”

These UK Football Player(s) Must Step Up

Kentucky football season ticket sales are lagging behind last year — and who can be surprised by that after four straight losing season.

So what player or players has to make a big jump in August for UK to be successful next season? That’s a question I posed to four media members who cover Kentucky football and basketball.

Tom Leach, UK Radio Network/ Leach Report: “We’ve seen players make transformations over the summer in the past and this would be a great time for Matt Elam to take it to another level in preparing himself to be a force in the middle of the defensive line come August. And other interior defensive linemen making that big jump would also be a big plus because the Cats.”

Mark Story, Lexington Herald- Leader: “The entire middle of the defensive front, and I’m sure people will focus especially on Matt Elam because of his recruiting profile.”

Keith Taylor, Kentucky Forward: “Boom Williams and the receivers, namely Garrett Johnson and Jeff Badet will need to build on the spring they each had in order for the Wildcats to establish a legitimate passing game. Didn’t see as many dropped passes during spring workouts, also a bonus for the new offensive coaching staff.”

Freddie Maggard, Kentucky Sports Radio: “Offensive tackle and the defensive line in entirety. If those two improve or develop, Kentucky has the surrounding skill talent to win some games.”

Probably not near enough attention was paid to what the Kentucky men’s golf team did when it finished 13th in the NCAA championships after failing to even make the tourney field last year. It was Kentucky’s best finish since 2006 when the Cats were sixth.

Coach Brian Craig got UK into the NCAA for the sixth time in his tenure and not only did the Cats play well, but they did it with only one senior and four of the five NCAA players were Kentuckians.

It was quite a year for the Cats. Stallings had a ninehole score of 29 during a 7-under par round of 65. He was the first UK player to shoot a 65 in two years when Snyder did the same things at the SEC Championships. Stallings was only the 11th UK player since 2005 to shoot 65 or better in a round.

The team won its first tournament title in several years and McDaniel had a terrific individual season.

Stallings’ mother, Pam, is understandably proud of what the team did at the NCAA Championship in Oregon.

“Everyone in Oregon was simply spectacular and watching Golf Channel realizing how well our boys have done — the UK Nation should be so proud and coach Craig and the boys deserve all the attention and support,” Pam Stallings said.

The team probably deserved more attention because the 13th-place finish was higher than the more high profile UK teams had this year.

Seven-footer DeAndre Ayton of Hillcrest Academy in Phoenix is one of the top players in the 2017 recruiting class but Kentucky’s interest in him had seen to wane until recently when Ayton said he has again been hearing regularly from the UK staff.

Much like Skal Labissiere, Ayton has not played basketball as long as many others in his recruiting class. He will be 18 in late July, but started playing basketball in his native Bahamas only five years ago. He says he still can’t remember exactly why he started playing.

“I didn’t really come over here to United States for basketball. It was really just for a good education and opportunity. Coaches started to see my potential and size. They wanted to train me and I just fell in love with it,” Ayton said. “I have always been tall. I never had growing pains.”

One of his favorite players happens to be former Wildcat Anthony Davis.

“Anthony Davis is something special. To be a point guard and now have point guard skills at his size, that’s crazy. He can put the ball on the floor, go by an opponent any time he wants. That is what I am trying to work on as well. I model my game after Anthony Davis, too,” Ayton said.

Ayton prides himself in his 3-point shooting.

“We have worked and put up a lot of shots off the dribble, spot up shooting. Every time we got in the gym we work on post moves and shooting every day,” Ayton said.

Ayton says the attention from summer games and big-time coaches from Kentucky, Duke, Kansas and others will not distract him. He does not plan to officially trim his college list until later this summer and then take his official visits.

“I have got to keep my eye on the prize to be honest. The day you fail at your craft, nobody is going to want to show you any attention,” Ayton said.