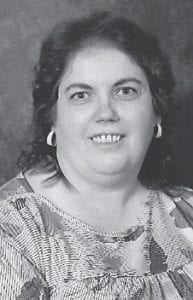 Born at Kodak, she was a daughter of the late Ervin and Mae Eversole.

Burial was in Michigan Memorial Park.