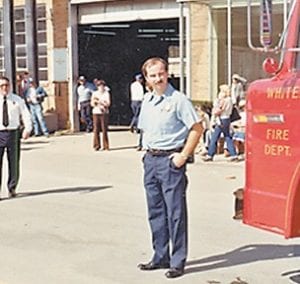 What started as a remembrance of a late Whitesburg firefighter has resulted in the first Fire Officers Memorial 3k/5k Walk/Run that will take place in Whitesburg on Saturday.

All proceeds will benefit the Whitesburg Fire Department.

Thelma Witt was a star basketball player at Whitesburg High School in March 1983 when Mark Witt was killed in an automobile accident in Breathitt County as he was on his way back to Whitesburg from watching Ms. Witt and her team play in a girls’ 14th Regional tournament game.

On Veterans Day 2015, Richard Smith of Letcher paid tribute to Mark Witt, who was a veteran and a miner at Scotia Coal Company.

“He took a picture of Mark’s gravestone and put it on social media,” Thelma Witt said. “I thought it was nice and wanted to do something to keep up his memory.”

Witt said she soon got in touch with Lee Anna Mullins, a volunteer firefighter whose husband, Gary, now serves as the city’s fire chief, and Whitesburg City Councilwoman Robin Bowen- Watko, whose late father Philmore Bowen served as city fire chief for a number of years. Together, the three came up with the idea of “the first fire officer’s memorial,” said Witt.

Local historians say fire department was first established in Whitesburg in 1927, with the station located near the current Walmart. However, it wasn’t until 1947 when the city built a new fire station, police station and city hall on Webb Street that the city had a fully equipped and modern fire department. It is from that year forward that the late fire officers now being honored served.

Those being honored are:

• Remious Day: Day was the city’s first modern fire chief, serving for 20 years, before he died of a long illness on September 23, 1966.

“Though Remious Day’s official title was ‘fire chief,’ he was much more than that to the City of Whitesburg,” late Mountain Eagle editor Tom Gish wrote at the time of Day’s passing in a Lexington hospital at age 44. “For years he was an unofficial city manager, the man Whitesburg residents contacted when they wanted a city service or when they wanted to complain about something which displeased them.

“… He was serious about the business of fire prevention and fire protection, and last winter he closed the Whitesburg grade and high school buildings in the conviction that they were fire hazards and were not safe for children to attend. … In short, Day was not the kind of fire chief one expects to find in a small eastern Kentucky town, and all of us will miss him.”

Day was a Marine Corps veteran of World War II.

• Philmore Bowen: Late Fire Chief Philmore Bowen started, who replaced Remious Day, joined the Whitesburg Fire Department as a teenaged. When called to duty, he served the United States Army in the Asian Pacific from 1944-46. When arriving home, Bowen became active in the VFW and continued in the fire service.

In the early 1950’s, seeing a need for fire service in Letcher County’s unprotected areas, Bowen created a satellite fire department through the cooperation of the City of Whitesburg and the local VFW, which would service the unprotected parts of the county. Philmore served as Chief of the VFW fire department until 1966.

• Ferdinand Moore (1911- 2001): Moore was a funeral director and embalmer for more than 60 years and mayor of Whitesburg for 26 years. He was a volunteer fireman. a member of Neon and Whitesburg Lion’s Clubs, a member and past master of the Whitesburg Masonic Lodge, a member of the Eastern Star, and veteran of World War ll. More was a member of the VFW, the Fraternal Order of Police and the American Legion. Moore served as assistant chief under chiefs Remious Day and Philmore Bowen.

• Morris Mullins: A dedicated volunteer, Morris Mullins served as a trustee for the Whitesburg United Methodist Men for 20 years. He served as chairman of the Housing Authority of Whitesburg and on the Steering Committee and Building and Trades Council of the Letcher county Vocational School. He held the title of Deputy Fire Chief of the Whitesburg Fire Dept. for 35 years. He was an active member of VFW Post 5829 and the American Legions, having served in the Pacific Theater as a member of the occupied forces of Japan in WWII. He served as a Scout leader and supporter of the Boy Scouts of America.

• Bobby P. Pennington: Pennington began volunteering as a fire fighter in 1949 under Chief Remious Day. He later became a captain with the fire department under Chief Bowen. He continued to serve as a captain under Chief Roy Benge and Chief Truman Thompson until his death .

•Woodrow Bates: Woodrow Bates began as a volunteer firefighter under Chief Bowen in 1967, serving as a captain until his death in 1987.

• Mark Witt: Mark Witt, began as a volunteer fire fighter during his teenage years under Chief Bowen. If he was in town, he was at the fire department. After serving in the Vietnam War, Witt returned home and continued as a volunteer with the fire department. He later was hired as an assistant fire chief under Chief Bowen and continued in this role until his death in 1983.

• John Williams: Williams became a volunteer firefighter in December 1994. He served under Chief Roy Benge, Chief Truman Thompson and Chief Gary Mullins until his death in 2014. He served as chaplain with the department and was there to say a prayer asking for safety for the firefighters. John also served as a councilman for the City of Whitesburg and as a deacon of the Whitesburg First Baptist Church.

• Herbert Smith: Herb Smith became a volunteer firefighter in 1949, later becoming a volunteer assistant chief under Chief Bowen. He served in this capacity until his death.