Everett Vanover served his country as a printer 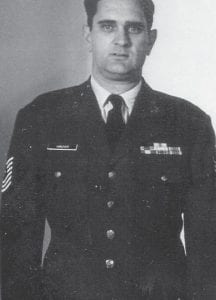 THIS PASSPORT PHOTO of Everett Vanover was taken when he was 40 years old in 1968, and was on his way to serve as a printer in the military in Germany.

Vanover, who retired from the U.S. Air Force as a master sergeant, was a printer during his military career, working on items including war plans and military forms, “everything the military wanted,” he said.

Along the way he met people he had known in Letcher County including Dr. Croley’s son Dunn, who worked with him during the Korean War, and Rodney Gallion, with whom he had gone to school at Burdine and Jenkins.

Vanover played baseball on the Bud Blizzard traveling team in Letcher and Wise counties at the ages of 15 and 16 during the summer. The late Estelle Mullins Vanover, his wife of 63 years, was reared in Bold Camp, Va.

“I left Jenkins High School at 16 years old because I did not have nice clothes to wear to school,” Vanover said. “My family was very poor. I got my GED in 1952 in 1952 from the military.

“When I got my top secret clearance from the old Army Air Corps in the mid ‘40s, they sent FBI agents to Jenkins and Burdine to talk to people that knew me — teachers, the police department, store owners, my parents — without telling what or why they were doing the asking about me. It scared my parents almost to death.”

Vanover retired from military service in 1972, and went to work for Syar Industries, a construction company in Napa, Calif., where he was the manager of the printing department. He retired from Syar on January at the age of 81. He started playing senior softball at the age of 50 and is still playing. He is a lifetime member of the Disabled American Veterans.

Vanover attended his 25th and 50th high school reunions at Jenkins, and says he feels sorry for some of his classmates who worked in the coalmines all their lives. He says he misses “the pretty mountains of Jenkins” and may return here when he retires from softball.