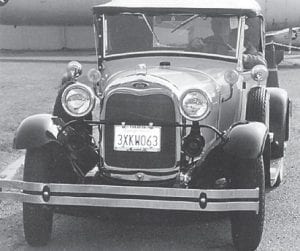 Everett Vanover is pictured in his 1929 Model A Ford Roadster with a rumble seat, participating in a parade at Travis Air Force Base where he won for best looking car.

When I returned from my tour overseas in 1955, I was assigned to Travis Air Force Base, Calif. It was during the jet age in the Air Force.

My new job was noncommissioned officer of all Military Air Transport Service (MATS) bases. With my new job, I would have quarters on base. For the first time, there were no wars.

With my growing family I got a part-time job in town for a couple of nights a week. I printed customers’ names on Bank of America checks for the bank. I also worked some weekends where I printed for large construction company in a one-man shop I had set up for them.

After I retired from the military I would work at this job until I was 81 years old. I made a lot of money on my 401K.

During this time I got hooked on old, classic cars after I went to my first old car swap meet. I found older cars in California had longer lives because of the weather here.

I took home a 1929 Ford Roadster I would drive for many years. The 1966 Ford Mustang I later bought, I did some work on and then sold it for a lot more than I paid for it.

I had four or five cars around my home, and I was the only driver until my wife and older kids learned how to drive.

I have not been to a car show or swap meet in many years, and I miss looking at those classic cars. Now, with me living alone, I’m car poor. I only have my Ford Ranger pickup.