Everyone I have talked to has snow 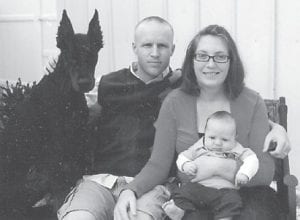 JONES FAMILY — Pictured are Misty and Joe Jones with fivemonth old Donovan. She is the daughter of Ida and Roger Hatton of Whitco, and granddaughter of Aggie and Charlie Hatton and the late Polly and Less Howard.

Welcome to some more snow. I wake up every morning to see how much snow we have. It’s been pretty, but it sure keeps us inside.

We will just rejoice and be glad to be alive. But I’ll be glad to see it go. It’s been a bad time for funerals.

We offer our sympathy to the families of Eugene Miller (one of our Marlowe boys) and Dannie Bolling. I was sorry I couldn’t get out and go to the funerals.

I also heard that another old friend had died, Lenville Sexton, who lived up the road from me. He was an old Marlowe friend and the grandfather of my neighbor Robyn Sexton. She loved him so much! I think he was up in his 90s. He was always a hardworking man, and was loved by all.

My sister, Judy Greene in Frankfort, called and said that Hazel Hart and her daughter Renee Campbell had visited with her, and she said that she was so pleased to see them. They all went out to eat, and they had a great time. 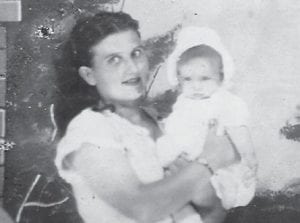 MARLOWE FRIEND — Nellie Banks, a former resident of Marlowe, is pictured holding one of her children. She now lives in Bloomington, Ind.

They sure must have; Renee called and said how much she and Hazel had enjoyed it.

Judy doesn’t have as much company since she moved away from us, and we are all getting older and don’t get around much anymore. Most of our family still live close, except Judy, Joanne and Hillard.

Betty Sue Anderson called me. It was good hearing from her. It had been a long time since we had talked, so we had to get caught up. She asked about Sally Taylor, and the late Pat Branham’s daughters, Tabitha and Melinda.

I asked about her sister Nellie Banks, and she said that she will turn 92 years old on March 4. I don’t think Nellie would mind her telling that. She has been blessed and I’m sure she is still pretty. I knew her when her children were real young, and I thought Nellie looked like a movie star with her long, black, curly hair.

We are all so thankful for Brother Robbie Conn and how well he is doing. He will soon be coming home. It’s a miracle!

My great-grandson Beau Hatton had a birthday on Feb. 20, and guess what? He is now a teenager. His grandmother Linda Hatton has one on Feb. 24. I don’t think she will be a teenager.

My granddaughter, Kathy Nelson of Alabama, had a birthday on Feb. 10. It’s been a big month for birthdays, and we have a baby shower coming up. Maybe I can write about them next week, if the weather permits and we can go.

Everyone I have talked to has snow, Rob in Owensboro, Astor in Ashland, Judy Greene in Frankfort, Roberta in Roanoke, Joanne Brown in Indiana.

Just hang in there, we have more coming this weekend. Keep plenty of food in your house and keep warm and look forward to better weather.

I haven’t had a chance to be on a jury yet because of the weather. I look forward to getting to see people again. My visiting has all been by phone and in the grocery stores. That’s been good. There isn’t much to write about since I can’t get out and about, but hopefully I can before long.

I haven’t felt bad staying in, I’ve sort of enjoyed it, but I’m ready to get out now. I really haven’t done any work inside, I’ve just been lazy, and I guess mostly I didn’t want to.