Everyone needs a goat for a pet 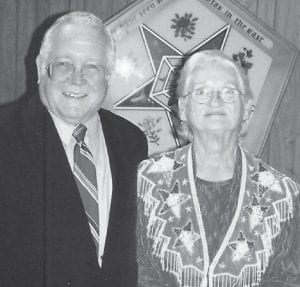 Hello, everyone, hope things are going well for all of you. I’m sure you are all enjoying this beautiful spring-like weather between the little winters. I’m not sure how many more we will have. I think we have dogwood and blackberry yet to come.

Rob and I missed Billy having dinner with us last Wednesday. He was in the middle of a big truck sale and couldn’t get away so we had dinner without him. Maybe he will be able to make it this week.

Let me correct a mistake I made in last week’s news. It wasn’t Chris Hooper who was going to Iraq, it was his brother, Tim Hooper. I’ve known those boys all their lives and I’ve always gotten their names mixed up. Sorry about that but, Chris, you got your name in the paper and didn’t have to do a thing. Maybe I’m getting old and forgetful and shouldn’t be doing this at all.

Tim Hooper gave his mother, Judy, a “medal of honor” for spending half her “lifetime caring for, protecting, teaching, and loving” him. Among the awards he gave her was an honorary registered nursing degree, an honorary master’s degree in teaching, and an honorary degree in psychology. He called her “the best mom in the world.”

We saw Ruth and Charles Caudill at Pine Mountain Grill. It was good talking to Ruth. Lizzie Mae Wright was also there with a friend of hers.

We had an anniversary party after church Sunday evening for our pastor, Bro. John Conn, and wife Alicia. We all enjoyed the food and cake and ice cream and all the good fellowship with our friends.

My son, Larry Hatton, had a nice swimming pool put in and I think his grandchildren and some friends have already been in it. I’m sure the water was cold. I hope no one got sick.

I enjoyed seeing Joe Bates with his goats at the back of Save-A-Lot store the other day. They were cleaning out the weeds and vines and having a feast. His goats were cute but I told him mine were cuter. I told him to come see if I wasn’t right. They sure make good pets. Ev- eryone needs at least one, or maybe a whole bunch.

My sisters, Betty Tyree and Louise Shepherd, had lunch at Dairy Queen last Wednesday to celebrate Louise’s birthday. Our sister, Kathleen Brock, couldn’t make it. She went to Cincinnati, Ohio, for the funeral of her brother-in-law. We’ll get together later.

I talked to my sister, Joann Brown, in Indianapolis on Saturday, and also my sister, Judy Green, in Somerset. They were both doing well. Joann’s husband, Donald Brown, is having lots of pain with arthritis. I hope he is feeling better.

My friend, Roberta Willie, is planning a trip to Whitesburg around June 8 for a baby shower at Blair Branch Church for her nephew, Roland Brown’s, wife Ellen, and she had promised to spend a night with me. I sure look forward to that. We never seem to get enough talking. Maybe we can catch up.

Elzie Ray Hatton, I was glad to get the pictures you sent, Irene painting rocks around her flower beds, working in her garden, and you at the grill cooking. That food sure looked good.

I finally got up to the Ermine Center the other day. They are getting ready for the Senior Games in Hazard. I was too late to sign up. I could have won them a walking medal. That’s one thing I’m pretty good at. I love to walk! Can’t seem to get much time to do it.

Shirley Breeding and I went to the Veterans Center on Thursday. Our husbands were about the same. Clyde said he had gained three pounds. He eats real well.

I was sorry to hear of the death of Dana Sturgill’s mother. Our sympathy goes out to all her family.

May God bless all of you. Try to go to church somewhere this week.