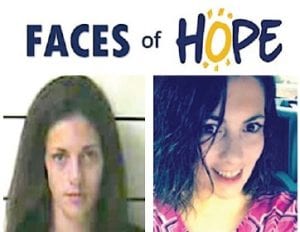 Kayla Parsons before, left, and after treatment for drug addiction through Addiction Recovery Care.

Growing up I had a fairly good childhood. I was the daughter of a police officer and a clerk at the hospital, and we lived a comfortable life. My sister and I went to church often and when as I got older I was in church every chance I could get. I was highly active in my youth group and went to every church camp, mission trip, and conference I could.

When I was 19 I was the victim of sexual assault. Instead of running toward God as quickly and as hard as I could, I began to run away from Him. I gathered all of the thoughts and emotions from the rape into a ball and hurled them toward God. I blamed Him for this happening to me, for my innocence being stolen. I began to experiment with alcohol and any drug I could find. I latched onto anything that could take me away from reality.

I’ve told people that my “moderation switch” is broken. I take everything to extremes, and my experimentation turned quickly to addiction. At the age of 20 I was pregnant and sitting in a jail cell for the first time. This began a pattern of being in and out of jails and rehabs. After each stint my addiction would progress.

By the age of 25, I had long since spiraled out of control and I was living in hell. I was heavily addicted, both physically and emotionally, and I was using IV drugs. I was living in a house that frequently had either the water or electricity turned off. Utilities just weren’t as important as the drugs. I had lost my daughter and was told I would never lay eyes on her again. I felt hopeless, so I used more drugs. I used more drugs and so I felt more hopeless. I was stuck in a cycle of despair and couldn’t see a way out. Every time I would use I would use enough that I could overdose and end my life. However, something would happen each time so that I could not get it all in me. I thought that God was punishing me. Turns out that instead He just had other plans for me.

After being arrested for manufacturing methamphetamine, my charges were dropped to a lesser charge and I was released from jail after serving 11 months. While in jail I met several amazing people who would bring church into the jail. While I was incarcerated I used that time to get really close with God and build a relationship with Him. When I was released I continued this. God had delivered me from my drug addiction, but I failed to hand over all other aspects of my life. Before long I was pregnant again. Once I had the baby I also started a new job. Between the new job and the new baby, my relationship with God took a backseat. I started drinking and then after three and a half years with no drugs I began using again.

After a conversation with my family I decided to go to Karen’s Place (a Christian drug rehab center in Louisa, Ky.). Thankfully this decision was made before my addiction got to the place that it was before. I walked away from my job and went out in the middle of nowhere. I knew that I was going to a faith-based center, but I didn’t know how I felt about jumping all-in into a relationship with God again. I had built a wall around my heart and I didn’t think I was ready to break it down for anybody, even the Almighty.

While at Karen’s Place, God began to do a mighty work in me. The wall that I had built came crashing down around me. Through my counselor and some prayer healing, God began to expose areas of my heart that I didn’t even know were broken and heal them. I learned who I am; the real me. I always attached my identity to the people around me, and the things I did. I began to see what it meant to be a daughter of the King, to be fearfully and wonderfully made, to have a purpose in life.

I graduated the program, completed my internship, graduated the Peer Support Academy, and became hired on as staff. I now work out of the corporate office in a position that is my dream job. I am a mommy to both of my girls. I am a daughter. I am a granddaughter. I am a sister. I am a friend. Before I went to Karen’s Place, I hated everybody, including myself. Today I genuinely love people. I care about them and I want to help them. Not only have I realized who I am, but I feel free to be myself.

I celebrated a year sober last August 11. In looking over the last year I am amazed at the work God has done on my life and the transformation. Philippians 1:6 tells me that God has started a good work in me will be faithful to complete it. Although I absolutely love my life now, I know that He’s not done. I have such hope for my future and where He is going to take me.

Advice for the addict still struggling?

You’re not too far gone. If you’re still breathing, it’s not too late. Give recovery a shot. I know it’s a terrifying step to take, but it’s worth it. In six months or a year you’ll be glad you started today.

What obstacles or roadblocks have you faced in your recovery?

One of my biggest roadblocks has been my low self-esteem and lack of confidence. I had come to view myself as the mistakes that I had made and the pain that I had caused. I couldn’t see myself as having any value. Once I was able to find my identity in Christ and began to heal, I found a new confidence and am now able to hold my head high.

What is something you want people who never struggled with addiction to know?

Nobody wakes up one morning and decides to be an addict. Gradually we fall deeper and deeper until all of a sudden we find ourselves trapped mentally and physically in a hell that we feel like we’ll never escape. Nobody likes the things that they have to do for drugs. Underneath the drugs and the pain addicts are some of the best people I’ve met. Addiction makes a person feel isolated and hopeless which drives them deeper into the pit. Although it’s a self-made hole, if we could help more addicts realize that there is a way out, I think we’d start to find a solution to the drug problem that is plaguing our area. Hope is the key.

What advice do you have for family members of a person in addiction?

Don’t give up. Love your family members. Pray for them. Offer them help. I know that you are hurting as well. I’d suggest finding a Celebrate Recovery group or Al-Alon group so that you can get educated and find your own healing.

Kayla Parsons is a resident of Lawrence County. If you or a loved one is struggling with addiction, please call Addiction Recovery Care at 606-638-0938 or visit them on the web at www.arccenters.com.