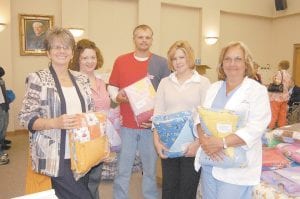 Participants in the Letcher County Drug Court made 40 quilts to be distributed to babies born dependant on drugs. The blankets were given to Leanna Ison, chief nursing officer at Whitesburg Appalachian Regional Hospital, and Diane Watts, nurse manager of obstetrics and pediatric department at Whitesburg ARH, at a drug court graduation held in the Letcher Circuit Courtroom on Oct. 9. Pictured from left are Ison, Letcher County Drug Court participants Andrea Cornett, Curtis Branham and Tabitha Madden and Watts.

“They scream,” said Diane Watts, nurse manager of obstetrics and pediatric department at the Whitesburg Appalachian Regional Hospital. “They cry. They have jittery shakes. They have diarrhea. They spit up their formula. … They are miserable little babies. It is very sad.”

Watts said babies whose mothers used methadone or cocaine while pregnant are forced to endure some of the worst cases of withdrawal.

Several participants of the Letcher County Drug Court Program have been making quilts for the drug-addicted babies to be wrapped in at the hospital. Forty of the quilts were presented to hospital workers last week.

“This is part of recovering addicts giving back,” said Tabitha Madden, a drug court participant from Smoot Creek. “We know how hard it was for us to come off from an addiction and I can’t imagine how hard it would be for a baby. Giving back to the babies that have not asked to be brought into the world like this is heartwarming.”

Madden said the babies go through the same wrenching withdrawals she used to suffer before she stopped doing drugs.

“The hardest thing is to come off drugs ,” said Curtis Branham, a drug court participant from McRoberts. Branham said once he became drug-free he had to start dealing with reality.

“You start thinking about things you tried to block out by doing dr ugs,” said Branham.

Branham and Madden both agree their families have helped them through tough times associated with their addictions.

“I don’t think our suffering could be near what our families have gone through,” said Madden. “People don’t want to give us back their trust and this is one way to show that we are not like we used to be.”

Even though drug court participants are busy fulfilling requirements of drug court including Narcotics Anonymous meetings, group support meetings, and being called in for random drug tests, participants find time to make the baby blankets.

“Whenever they have a spare chance they work on it,” said Brenda Hall, drug court program supervisor.

Hall taught Madden and Branham how to sew and piece material together to make the quilts.

“We cut it, sew it and do it all ourselves,” said Branham. “Instead of taking from the people, you are giving back.”

Madden said each quilt is unique.

Watts said the quilts are greatly appreciated when given to babies in the hospital.

“The moms are very thankful and the n urses ar e too ,” she said.

“They do so much traveling back and forth to the hospital,” said Branham. “This is something to give them to cuddle up to.”

Watts said the level of withdrawal each baby suffers “depends on how much the mom took.”

Watts said the addicted mothers are in an awkward position in the hospital knowing that they may not get to take their babies home with them.

“What ends up happening is the babies go home with the mother’s parents or the father’s parents,” said Watts.

Watts worries about what happens to the babies as they grow older.

“We really don’t know if there are long-lasting problems,” said Watts. “One day soon we will know because it has been going on quite a few years.”

Drug court participants presented the 40 quilts to Watts and Leanna Ison, chief nursing officer at Whitesburg ARH, in the Letcher Circuit Courtoom. They are now planning for a community project for the holiday season.

“We had so much stuff for them that it wouldn’t fit in their vehicles,” said Branham.

“We spent so much out of our own pockets last year,” said Branham.

Donations to help provide Christmas presents to needy families or blankets for drug-addicted babies can be sent to the Letcher County Drug Court located at 50 East Main Street in Whitesburg. Call 633-8925 for information.