Ex-deputy gets parole after serving nearly one year 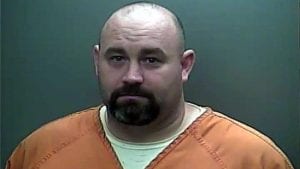 Former Letcher County Deputy Sheriff Brian Damron will be released from prison July 1, two weeks’ short of serving one full year of a five-year prison term he accepted in a plea agreement reached July 14, 2015.
The decision by the Kentucky Parole Board, which approved Damron’s coming release after reviewing his file during a recent hearing, doesn’t come as a surprise to Pike Commonwealth’s Attorney Rick Damron, who prosecuted the state’s case against Damron last summer.
“I’m not surprised because the large majority of people who see the parole board for the first time do make parole, especially if it isn’t a violent crime,” he said, adding that Damron will have met the parole threshold of serving 20 percent of his sentence.
Bartley said that whether to grant parole to an inmate is solely the function of the parole board and that he doesn’t recommend or petition against inmates seeking parole. He pointed out that Damron had no prior criminal history and had other factors in his favor.
Before his release next month, Damron will be required to notify the parole board where he is going to live and get the board’s prior approval. He will be on parole for four years and must report regularly to a parole officer. If Damron violates the law or leaves his approved parole placement without permission, another parole board hearing would be scheduled and he could end up having to serve the rest of his prison sentence.
The former deputy, who was second-in-command at the sheriff’s office until October 2014, has been held in the Harlan Regional Jail since pleading guilty to six counts of receiving stolen property and one count of theft by unlawful taking after admitting that he stole four handguns and a rifle from the evidence locker in the sheriff’s office. He also admitted to stealing more than $500 in cash from the locker.
The charges against Damron were contained in an eight-count indictment returned by the Letcher County Grand Jury after a lengthy investigation by the sheriff’s office. Neither Sheriff Danny Webb, who fired Damron in January 2015, nor any of Webb’s deputies were aware that Damron had been granted parole until reports surfaced Monday.
“All we can say about it is that we did our jobs,” said a sheriff’s department spokesman before declining to comment further.
Special Letcher Circuit Judge Johnny Ray Harris sentenced Damron after Damron’s attorney, Daniel Dotson of Whitesburg, and Bartley reached a plea agreement.
Dotson could not be reached for comment Monday afternoon.