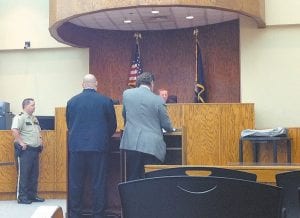 Former Letcher County sheriff ’s deputy Brian Damron stood to the left of his attorney in Letcher Circuit Court during his arraignment. (Photo by Sunset Breeding)

Former Letcher County Sheriff ’s deputy Brian Damron pleaded not guilty this week to theft-related charges and was ordered to return to court on July 14 for a pre-trial conference.

After Damron, of Jenkins, pleaded not guilty to the eight-count indictment accusing him of stealing firearms and cash, Judge Harris ruled that Damron must post a bond of $1,000 in cash or put up property with a value of at least $10,000 by Friday if he hopes to stay out of jail between now and his trial date, which has not been set.

However, Judge Harris set Damron’s pre-trial conference for July 14 and told Damron’s attorney, Daniel Dotson of Whitesburg, and Special Prosecutor Rick Bartley that if the two sides hope to reach a plea deal it better be done by that date.

Bartley, the Pike County commonwealth’s attorney, was assigned to the case after Letcher Commonwealth’s Attorney Edison G. Banks stepped aside.

Judge Harris also said that Damron will be jailed if he can’t make the $1,000 cash bond payment (10 percent of $10,000) or the appropriate property bond by Friday. If Damron is able to post the necessary bond he will be placed under house arrest with the following conditions:

• that Damron will not use of any alcohol or illegal drugs

• that Damron report to a pretrial services officer weekly

• that Damron will not leave the Commonwealth

Once the sheriff ’s department’s top deputy, Damron was dismissed from his job earlier this year after evidence and firearms were discovered missing from the sheriff ’s office and evidence vault.