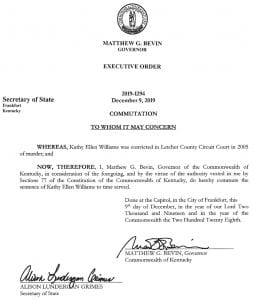 Shown above is the order of commutation of the sentence of Kathy Walters Williams signed December 9 by then-outgoing Gov. Matt Bevin, who erroneously refers to “Letcher County Circuit Court.”

A Jeremiah woman convicted in a 2003 murder at Spring Branch has been released from prison after former Gov. Matt Bevin commuted her sentence from life to time served.

Kathy Walters Williams was convicted in Letcher Circuit Court in April 2005 for the murder of Forrester Caudill, 19, on November 30, 2003, at Jeremiah. Williams was sentenced in May 2005, and was not supposed to be eligible for consideration for parole until late 2023.

She is one of more than 400 convicted felons either pardoned or whose sentences were commuted between the November election and Bevin’s last day in office, December 9. The exact number is still not known. A message on the Secretary of State’s web page search page says, “Due to the volume of final actions by Governor Bevin, documents are still being processed.” Some estimates put the number at over 800.

“I feel like this was an abuse of discretion and I join with other commonwealth’s attorneys in demanding this whole thing be investigated,” Letcher Commonwealth’s Attorney Edison Banks said.

The state’s commonwealth’s attorneys are making an open records request for the files of all of the people pardoned or whose sentences were commuted by Bevin, and are calling for an investigation of the former governor after it was reported the family of at least one person receiving a pardon raised more than $20,000 for a Bevin campaign committee to pay off loans from himself to his campaign.

Letcher County Sheriff Mickey Stines said he could not understand how any governor could have the time to invest in giving serious review to so many cases and make a decision on each of them.

“I think they should change that whole process,” he said. “The gover- nor should not be able to pardon. There should be a panel that makes that decision.”

According to accounts of Williams’s crime at the time, Lucille Combs was in the kitchen of her home on Black Bottom road when she saw a Ford Ranger pickup roll down a hill, hit a neighbor’s car, and continue through her backyard before hitting an outbuilding and stopping. He husband, Eddie Combs, was working on his coal truck when he heard her scream and went to see what had happened. When he got to the truck, Caudill was dying in the driver’s seat, a bullet wound in his chest.

The incident was the culmination of weeks of what was, at the time, thought to be tit-for-tat crimes.

The “Red Barn,” a former barn on Hobart Ison’s farm that was converted to a Head Start building in the mid-1960s and to an apartment later, was being rented by Williams when it burned to the ground about a week before the murder. She accused the Dustin Adams of arson. Shortly after, a sawmill Dustin’s father Toby Adams operated was burned.

Caudill, who was a nephew of Toby Adams, worked at the sawmill, and was said to be coming there to check on the fire damage to a car he had left there. Williams never denied shooting him, but claimed she thought Toby Adams had sent him to burn down her son J.J. Walters’s trailer. She also claimed he had swung a switchblade knife at her, but police found no knife.

Walters shot Caudill once in the chest, just to the right of his sternum, puncturing his lung, his ascending aorta and his superior vena cava, the vein that returns blood from the upper body to the heart. The bullet exited under his shoulder blade.

Williams’s employer, Begie “Moose” Breeding, had been in possession of the .38 caliber Smith & Wesson revolver Williams used to kill Caudill. The gun was used by Hobart Ison to kill Canadian filmmaker Hugh O’Connor in 1967, and Breeding, who was related to Ison, got it from the sheriff ’s department after Ison pleaded guilty to manslaughter in 1969. Walters said she took the gun from under Breeding’s mattress as he slept. Breeding said she must have stolen it from a hiding place in a couch cushion. Other testimony said Breeding’s son gave her the gun.

After the murder, someone soaked the gun in motor oil to make it impossible to take fingerprints, and hid it under a rock on top of a mountain. Williams led the police to the gun after first claiming she threw it in a ditch across the road at the old Cinema 7 Drive In.

Letcher Commonwealth’s Attorney Edison Banks said he was not consulted by the governor’s office about the commutation, and no one he knows of was consulted, including family members of the victim. Police at the time had recordings of Williams’s late son, J.J. Walters, who died after his mother shot Caudill, talking to Breeding, who is also dead, about burning down Banks’s home. He died of a drug overdose before her trial, and Banks, who was in a wheelchair during the trial, said Williams lunged at him and threatened him twice during the trial, accusing him of having J.J. killed.

It is not clear whether Williams will come back to Letcher County. Her family here is mostly dead. She has a son in Wisconsin who wrote to the court in 2012 asking for early release, and promising she would live with him if she got out of prison.