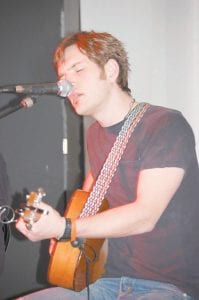 Browan Lollar, formerly of Jason Isbell & The 400 Unit, is seen during a March 2010 concert at Summit City. (Photo by Sally Barto)

The music of Muscle Shoals, Alabama returns to eastern Kentucky Friday night when Browan Lollar, former guitarist with Jason Isbell & The 400 Unit, debuts his new trio at Summit City in Whitesburg. After Lollar performs with his new band he will then take the stage with headliners Lauderdale.

Lauderdale was formed in early 2005 in the Shoals area of northern Alabama where its members were born and raised. The band is fronted by singer/songwriter/guitarist Niles Lee, and its sound has been compared to that of other groups ranging from the Jayhawks to the Drive-By Truckers. Lauderdale’s second album, Moving On, was released in August and is available on iTunes.

The Shoals area of Alabama is located along the Tennessee River and is made up of four separate towns known as the Quad Cities — Florence, Sheffield, Tuscumbia and Muscle Shoals — and has long been considered a hotbed of rock and blues music. It is the home of two of the most historic recording studios in the U.S., the Fame Studios and Muscle Shoals Sound Studio.

While some of the best known songs by acts such as Bob Seger, The Allman Brothers Band, The Rolling Stones, The Staple Singers, Aretha Franklin, Wilson Pickett, Lynyrd Skynyrd and Rod Stewart were recorded in Muscle Shoals, the neighboring town of Florence is often referred to as the “Birthplace of the Blues” because it is the birthplace of W.C. Handy, who known as the “Father of the Blues.”

Florence is also home to Lollar, a 28-year-old guitarist who began doing session work at Fame Studios while still a teenager. Lollar joined Isbell and The 400 Unit in 2006, but left that group in August. He has since been putting together his own band with plans to begin recording an album in January.