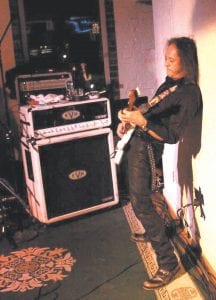 Jake E. Lee played his guitar in Whitesburg on March 20 while he and his new band Red Dragon Cartel performed before a packed house at Summit City. Lee is best known for his work in the mid-1980s with Ozzy Osbourne (“Bark at the Moon” and “Ultimate Sin”) and the band “Badlands.” Red Dragon Cartel is touring in support of its self-titled debut album, which entered the Billboard charts at a very respectable No. 69 when it was released in February.