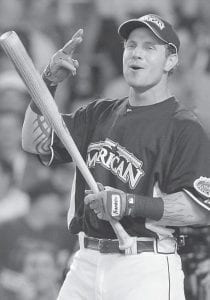 Josh Hamilton gestured while participating in the Home Run Derby at Yankee Stadium, where he hit 28 homers in the first round earlier this week. (AP)

Fans at Yankee Stadium were chanting Josh Hamilton’s name and the theme music from “Rocky” was blaring over the loudspeakers.

Alas, the Texas Rangers’ comeback kid had nothing left.

Hamilton hit a record 28 homers in the first round of the All- Star Home Run Derby before running out of gas and getting beaten by Minnesota’s Justin Morneau in the finals Monday night.

The 2006 AL MVP topped a tired Hamilton 5-3 in the last round, giving him the derby crown. But the night belonged to Hamilton, a first-time All-Star who put on a dazzling power display worthy of The House That Ruth Built.

Back from eight trips to rehab for drug and alcohol addiction that derailed his career, Hamilton broke Bobby Abreu’s mark for one round. Abreu hit 24 home runs in the first round in 2005 at Detroit’s Comerica Park.

Hamilton’s incredible tale of redemption has made national news this season, and he retold a story Monday afternoon about a vivid dream he had two years ago – he was being interviewed at Yankee Stadium after participating in the Home Run Derby.

“I can say it was a coincidence, but I don’t believe in those,” he said.

Mind you, his dream came while Hamilton was still banned from Major League Baseball, and before this year’s All-Star game was awarded to the venerable ballpark in its final season.

“Obviously, the dream, I didn’t know how many I would hit,” Hamilton said in a TV interview after his huge first-round performance. “I just feel blessed to have played here.”

With the crowd of 53,716 firmly behind him, undoubtedly warmed by his improbable journey to stardom, Hamilton connected on 13 consecutive cuts before falling short of the fences on his final two in the first round.

Hamilton was drafted No. 1 overall by Tampa Bay out of high school in 1999, with some veteran scouts calling him the best prospect they’d ever seen. He finally reached the majors last year with Cincinnati, then was traded in the offseason for All-Star Edinson Volquez and another pitcher in a deal that has paid off immensely for both teams.

With his smooth left-handed swing and jaw-dropping power, Hamilton seemed a natural choice to take advantage of Yankee Stadium’s short right-field porch. But he cleared the deepest fences with ease, hitting three shots farther than 500 feet ¿î including his longest estimated at 518.

“Really? Holy cow,” said Hamilton, who has 21 homers this season and leads the majors with 95 RBIs.

That was the third-longest drive in the 19-year history of the derby, behind Sammy Sosa’s 524-foot homer in 2002 at Miller Park in Milwaukee and Frank Thomas’ 519-footer in 1994 at old Three Rivers Stadium in Pittsburgh.

“We were over there in awe of what he was doing,” Morneau said.

Hamilton’s first-round homers totaled 12,458 feet, an average of 445 each. He nearly had another one, but it was waved off because a fan reached over the fence to catch it.

“They should have juiced the ball up. I’d have hit the subway,” Hamilton said.

His 28 homers in the first round were the second-highest total for an entire derby, behind Abreu’s 41 for Philadelphia in 2005.

Signing autographs for players’ young kids between swings, Hamilton stepped out of the batter’s box for a few deep breaths and received high fives from his Texas teammates on the AL All-Star squad. Milton Bradley even strolled to the plate to wipe off Hamilton’s forehead with a towel.

“We were sitting there saying to each other, ‘How do you follow that?'” Morneau said. “I’m glad I didn’t hit right after him, that’s for sure.”

After his first round ended, Hamilton was engulfed with hugs and congratulations from All-Stars on both sides.

His batting practice pitcher also was quite a story. Hamilton chose a 71-year-old volunteer coach who often threw BP to him when he was a teenager in North Carolina.

Hamilton totaled 35 homers (on 59 swings) to Morneau’s 22 (on 52 cuts). The Texas outfielder stopped after making only four outs in the second round because he was already assured a spot in the finals. Contestants get 10 outs in each round.

“I couldn’t ask for anything else,” Hamilton said. “You don’t feel tired, but obviously you’re a little tired.”

When it was over, Morneau was left practically apologizing for beating Hamilton.

“He was the one that put on the show,” he said. “I’m just glad I was a part of the whole thing.

“It does seem kind of unfair that he didn’t get to win the whole thing,” Morneau added. “Anyone who was here won’t forget that performance.”

Nobody has ever hit a fair ball out of Yankee Stadium, but some of baseball’s elite boppers took aim at Monument Park and the ballpark’s vast upper deck Monday night.

One of Hamilton’s 500-foot drives hit a wall behind the rightfield bleachers, drawing a roar from the delirious crowd.