Georgia linebacker Trevin Wallace is the third highest-rated recruit Kentucky coach Mark Stoops has signed at Kentucky behind No. 1 Landon Young and No. 2 Matt Elam.

The four-star prospect from Jesup (Ga.) Wayne County is rated as the No. 2 inside linebacker nationally by 247Sports and picked UK over Auburn, Florida State, South Carolina and Ole Miss. He is only the seventh top-100 recruit to sign with UK since 2014 and second in the 2021 recruiting class along with Frederick Douglass offensive lineman Jager Burton.

Lyndsey Gough is the sports director for WTOC-TV in Savannah, Ga. She is a 2015 University of Kentucky graduate and worked for WBKO-TV in Bowling Green for one year and spent two years with Spectrum News Kentucky for two years where she covered both UK and Louisville sports. Gough was at Wallace’s decision-making ceremony last week when he picked the Wildcats and liked how he handled it.

“He picked up an Ole Miss ball, then put it down. He picked up a UK ball and put it down and my UK heart sank,” she said. “Then he unzipped his jacket and said Kentucky, so that made me smile. I was even wearing my (UK) class ring and told him welcome to BBN. You could also tell people there were really happy for him.” 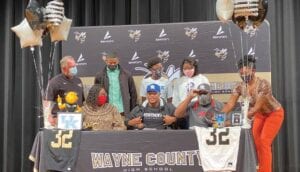 Georgia linebacker Trevin Wallace got some advice from former UK linebacker Jamin Davis that helped him decide to sign with the Wildcats last week. (Photo by Lyndsey Gough/WTOC-TV)

No one was happier than Stoops and his coaching staff because they hope Wallace can provide immediate help to a position where UK needs playmakers. Leading tackler Jamin Davis opted to leave for the NFL but also had a role in Wallace becoming a Wildcat.

Because of the pandemic, Wallace’s recruitment has been Zoom calls with UK coaches or phone calls. Wallace has never been to Lexington.

“His decision to pick UK was fully based on his relationship with the coaches,” Gough said. “It wasn’t because he visited and loved the new facilities. It also helped that he talked to Jamin Davis who is from just one county over.

“Trevin called him a couple of weeks ago and he (Davis) told him he would succeed anywhere he would go because of his talent but he could do something really special at Kentucky and that helped solidify his decision.” s

Seems like every week — or maybe every game — that North Laurel sophomore standout Reed Sheppard gets close to having a triple-double. He recently had 54 points, nine assists and eight rebounds in a 98-90 win over Corbin just a week after a previous 50-point game.

Sheppard’s parents are former UK guards Stacey Reed Sheppard and Jeff Sheppard. He was MVP of the 1998 Final Four and Stacey remains one of the top 10 all-time scorers at Kentucky.

Reed Sheppard already has five Division I scholarship offers, including one from Iowa. He does not have a Kentucky offer and there has been speculation by some UK fans that Jeff Sheppard and John Calipari do not see eye to eye on matters and that would keep Reed Sheppard from ever going to UK.

“There is nothing,” Jeff Sheppard said when asked about animosity between him and Calipari. “I am going to try my best to be as removed as possible from this whole recruiting thing.”

Apparently the perception some have that Sheppard and Calipari do not get along goes back to the 2013 UK Ohio Convention where Sheppard spoke to a group of about 150 UK fans — and I was there. He talked about valuing championships over draft picks and not being a fan of the oneand done concept — the same thing other former UK players have said.

He also said he felt more comfortable walking in to see Rick Pitino — his former coach at UK — at Louisville than he did Calipari. But that was because he barely knew Calipari and Pitino was his coach at UK.

I never sensed any animosity then and certainly did not when last week after numerous fans kept asking me and I talked to Sheppard about it.

“There’s nothing there,” Sheppard said. “It will be his decision. We are just trying to enjoy every step of the way right now.” s

What did it cost to lure two coaches away from the NFL to become part of Mark Stoops’s coaching staff at Kentucky?

New offensive coordinator Liam Coen will make $750,000 this year and $775,000 in 2022. Running backs coach Jemal Singleton, who had agreed to come to UK from the NFL in January but left earlier this week, was set to make $500,000 this year and in 2022. However, he has accepted the job as assistant head coach at Philadelphia.

Derek Terry of The Cats Pause reported that Coen will get an additional one month of salary if UK wins six or more games — and if UK plays a normal 2021 schedule only winning six games will be a disappointment. Incentives for reaching the SEC Championship or getting a spot in the College Football Playoff will earn two months’ salary but that will be a lot easier said than done. Coen didn’t need long to make his recruiting presence felt as Penn State grad transfer Will Levis announced he was coming to UK. The quarterback is finishing his degree at Penn State. He will not be on campus for spring practice but has three years of eligibility left.

Coen went after the Connecticut native when he entered the transfer portal. He started two games for the Nittany Lions, threw for 421 yards and one touchdown, and ran 82 times for 260 yards and three scores.

Levis had a new offensive coordinator each year at Penn State — and the Nittany Lions will have another new coordinator next season — so starting over with Coen should not be an issue for him. s

ESPN analyst Dick Vitale got on a crusade early in the Kentucky- Tennessee game scolding those who were even suggesting coach John Calipari should be fired for UK’s play this season. Kentucky went on to build a 10-point lead with 12 minutes to play only to lose by 11 points to the No. 11 Vols.

“I want to give a message out there to those people on social media talking about Calipari should be fired,” Vitale said in the first half. “Get real. Get absolutely real. The guy is one of the best coaches in America. I don’t care what this year shows. Bottom line, look at his track record at (U)Mass and at Kentucky. It’s off the charts.

“So get off that crazy feeling because he is not getting fired. That will not happen. I’ve got a better chance of growing hair than of him getting fired by Kentucky.” s

It was one of those performances to remember — or at least it seems like it should have been even if University of Kentucky swimmer Riley Gaines has a different approach.

“Honestly we don’t dwell on Louisville much. We addressed it and moved on. It did surprise me a little bit how I did but that’s over,” said Gaines.

Now it’s on to the Southeastern Conference Championship in Athens, Ga., Feb. 17-20 where the UK women expect to contend for the top spot with Georgia, Florida and Tennessee.

This year’s meet will be different since the men will compete Feb. 24-27. Normally the men and women compete at the same location at the same time and that creates a unique atmosphere, especially for the event finals.

“It’s been the same with dual meets this year so as an upperclassman and captain I just have to help bring the hype to push the freshmen, who won’t know what a normal SEC Championship is like any way,” Gaines said. “I think we can bring plenty of excitement because we know we can win.

“It’s going to come down to depth. If your team gets COVID, you are done. We have been super healthy all year and have not had nearly as many cases as other schools. You just try to minimize contact with anyone. You have still got to live a little but just being cautious like we have been.”

Gaines scored 44 points at last year’s SEC Championships but her best individual finish was 10th. She wants to make an A final (top eight). She is seeded No. 1 in the 200 freestyle. She will also be part of four relays.

Gaines ended up at Kentucky because of the recruiting efforts of UK associate coach Allison Reed Leather.

“I was unsure where I would go. I did not have that many close friends on club teams, but she (Leather) convinced me and everything about Kentucky has lived up to what she told me or surpassed it,” Gaines said.

Gaines started summer swim at age 4 or 5 in Gallatin just learning how to do the various strokes. She became a year-round swimmer at age 9 and credits much of her success to her coach.

“She was from Romania and was super stern but had the biggest heart,” Gaines said. “It’s rare in swimming to have the same coach your entire life, but every time I would go up to the next age group she came along. She was like a second mom and knew how to push me to get the best out of me.”

Gallatin is not a swimming mecca and Gaines normally swam with boys. That took some adjustment at UK.

“I had never really had the whole team aspect before. I was not used to having girls push me in practice. I did not like it at first that I was threatened by so many fast girls but it sure has helped me,” Gaines said.

She had other athletic options. Her mother, Telisha, was an allconference softball player at Austin Peay. Her dad, Brad, played in the NFL and a great-uncle won a Super Bowl.

Gaines played second base and pitched on her youth softball team. She said her speed was her best offensive attribute. Her travel team, though, won the Little League World Series twice.

“I always guessed I would play softball in college before swimming. Once I got to high school I realized I needed to pick one sport and stick with that. The long-term benefits of swimming seemed better. It’s not really a great reason why I picked swimming but it has worked out okay.”

No surprise her thinking is sound. She was a scholastic All- American in high school and has taken the same path at UK. Like former teammate Asia Seidt — the 2020 NCAA Woman of the Year — she has made an A in every class at UK.

“I aspire to be Asia Seidt,” Gaines laughed and said. “I am a pretty good student, too. Most swimmers are generally dedicated to what they do and if we do something, we do it all the way. The same thing applies in school.”

She is a human health science major with a minor in health law and hopes to go to dentistry school.

“I was a chemistry major but changed that because I did not want to be stuck being a chemist,” Gaines said.

And what about health law?

“I needed a couple of classes over the summer and was out of classes to take but I do not want to be a lawyer,” she said. s

Quote of the Week: “When you see a guy who played for you seven years ago and he has a son, is married and hasn’t changed how he is, you just smile. He just got more confident in who he is and comfortable in his skin,” John Calipari on former player Julius Randle of the New York Knicks in an interview with the New York Post.