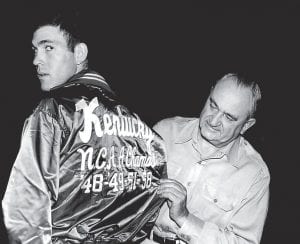 University of Kentucky coach Adolph Rupp looked over the jacket worn by former Neon resident Johnny Cox on December 1, 1958 at the Lexington campus. Cox was the only returning regular of the “Fiddlin’ Five” championship team from the season before. Kentucky had won four NCAA basketball championships, an accomplishment evident with the listing on the new warm-up togs, the blue jackets are lettered: Kentucky NCAA Champs 48-49-51-58. (AP Photos)

Editor’s note: When former University of Kentucky basketball great Johnny Cox was growing up in Neon, he wrote the following “Letter to Santa” for publication in the December 13, 1956 edition of The Mountain Eagle. Cox was a 10-yearold fourth-grader at Neon Grade School when he wrote to Santa that he was a “mean boy” who would

My name is Johnny, and I am in the fourth grade. I am ten years old. It was fun to see you tumbling down the chimney. I am a mean boy. I got four whippings this year.

Last Christmas I hung up my stocking and you filled it full, [but] the fire burned a hole in the bottom of it and it all fell out. My dog Rex was playing also around the Christmas tree and it fell down and the balls on it busted.

I want a cap buster to shoot on Christmas morning. I want a basketball for Christmas — if I don’t I will cry.

I go to Neon school. I have a pretty teacher. Her name is Delores. You will get struck on her if you see her. Bring her something this Christmas. 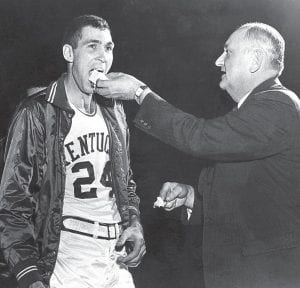 Kentucky coach Adolph Rupp fed cake to Johnny Cox on January 30, 1959 in Lexington after Kentucky won its 600th Rupp-coached victory by downing Georgia 108-55. cry if didn’t get a “cap buster” and basketball for Christmas. After playing his freshman and sophomore years at Fleming-Neon High School, Cox, who had grown to be 6’4”, transferred to Hazard High School, where he played under Coach Goebel Ritter, who would later coach at Whitesburg High School before becoming an assistant superintendent in the Letcher County system. Cox, now 80, still lives in Hazard. His jersey hangs in the rafters of Rupp Arena, marking him as one of the greatest to play for UK.