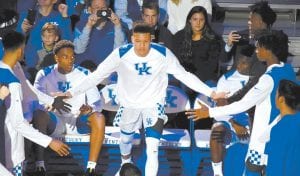 Patrick Patterson thinks every UK player, including Kevin Knox, should return to college next season rather than opt for the NBA. (Vicky Graff Photo)

It’s not going to happen, but John Calipari’s players should pay attention to some advice from former Wildcat Patrick Patterson about the 2018 draft.

Patterson was on UK’s 2010 team that lost in the Elite Eight. He’s now in his eighth year in the NBA and after the Cats lost at Missouri Saturday he posted this on Twitter: “I would be utterly thrilled if every one of these kids came back (to UK) next year.”

Depending on which mock draft you select, Kentucky has three players — Kevin Knox, Shai Gilgeous-Alexander and Hamidou Diallo — projected as potential first-round picks in the 2018 draft.

Most assume Knox will go to the NBA despite his up-anddown season. Gilgeous-Alexander was not seen as a one-and-done player, but his play at times has boosted his stock. Diallo almost went to the NBA last year without ever playing at Kentucky and there seems little doubt he wants to go even though one NBA scout told me his “average defense and lack of outside shooting” would not appeal to his team despite Diallo’s athleticism.

“An average defender his size who can’t score outside doesn’t play for our team,” the scout said.

Believe it or not, one recent mock draft has Jarred Vanderbilt in the first round even though he’s been hurt for most of the last three seasons and has lacked any scoring flow since his return to play in January.

Patterson stayed at UK until his junior year and turned that into a long, productive NBA career.

After spending six months in junior college, quarterback Terry Wilson feels like he is in “heaven” at Kentucky after enrolling in school in January.

A one-time Oregon signee, Wilson will be competing with Gunnar Hoak — and others — for the starting job.

“You have got to come in and get the respect (of the players). You have to be a guy they can trust. You can’t start off making the wrong decisions,” Wilson said.

He threw for 2,133 yards and 26 scores and ran for 518 yards and five touchdowns at Garden City Community College in Kansas in 2017.

He’s already been throwing and working out with UK’s receivers while also participating in the offseason conditioning program.

“I feel like just keeping my head strong, keeping my vision tight and just keeping that focus on what I need to do, what the goal is for me and this team, for the guys out there so we can get the job done,” Wilson said.

Mississippi coach Andy Kennedy is in his 12th year in the SEC and is a coach I’ve always respected for not being afraid to share his opinion whether it is popular or not.

When he says this is the best the league has ever been, I pay attention.

“I think the most bids that the SEC has ever gotten (to the NCAA Tournament) is six, that’s going to get shattered I think,” Kennedy said. “I think winning the Big 12/ SEC Challenge brought some validity and fuel to the fire as to how good the league is.

“Think about this, the teams that typically play Wednesday night in the SEC Tournament are the teams that finished in the bottom four. The top has always been good in the SEC. The middle has gotten a lot stronger, and the back has been a little bit of a fall off. Well now, there is no fall off.

“All four of the teams that were playing in last year’s Wednesday night in Nashville have all gotten a lot better. So I think top to bottom, this is the best that the league has ever been.”

Look at Alabama. It beat nationally ranked Oklahoma and then lost at home to Missouri. But the Tide bounced back by winning at Florida.

Another sign of the league’s strength? After Kentucky lost at Missouri Saturday, Coach John Calipari said his team could lose all eight remaining games — and no one thought it an outlandish statement. No, I don’t think that will happen but there are no “gimmes” left for UK — or any other SEC team.

Kelsey LaCroix thought about what it would be like to participate in the Olympics when she was a young gymnast.

She assumed any chance to participate in the Olympics ended when she made the decision to stick with cheerleading over gymnastics at age 11.

That decision worked out well, though, as she recently helped Kentucky win a third straight national cheer title. But now she’s going to the Olympics — along with other member of UK’s national cheerleading team.

They will participate in an exhibition cheer competition at the Olympics in South Korea next month. Teams from Great Britain, Russia, Germany, Norway, Australia and Canada will also be there as part of a push to hopefully one day make cheerleading an Olympic sport.

“That’s some of the top cheerleading powers around the world,” UK cheer coach Jomo Thompson said. “Cheerleading is exploding everywhere. To be chosen from so many great college teams to represent the United States and have that UK on our chest is just awesome.”

“Nationals is the big thing for us and we focused on that for so long,” LaCroix, a senior from Illinois, said. “The Olympics is a chance to celebrate what we have done and help make cheerleading even bigger. It’s kind of like the icing on the cake.”

Kentucky had been chosen to represent the United States before it won its 23rd national title. However, LaCroix said the Olympic invitation did add a little pressure at nationals.

“We wanted to win nationals first to prove to everyone that us getting the opportunity to go to the Olympics was legitimate and was a big deal for us,” she said. “It definitely increased the pressure on us. What if we had not won nationals? Some might have thought we didn’t deserve to go to the Olympics. But we did win and I think that shows we are very deserving to represent the United States.”

LaCroix has no idea what the international competition will be like. A select Team USA — UK cheerleaders Whitney Agee and Dallas Pringle made this year’s team — competes in the World Championships each spring but that doesn’t tell LaCroix how good the other countries might be.

“In the past they have been good,” the UK senior said. “We are going to give our best performance to represent USA. We are going to incorporate a few more skills and things into our routine. It won’t be harder, just different.”

The cheer team took a few days off after nationals to give their “bodies a break” from the intense practices they had leading into the national championships. They will be in South Korea from Feb. 18-25. The Olympics start Feb. 10.

“I know it would be really cool to meet some of the athletes and be around them and in the same venue. It’s just an honor to be going. I think it will be an amazing experience.”

Her parents are just as excited that she has the opportunity be part of the Olympics.

“The Olympics are always in some crazy place that is far away that is really expensive,” LaCroix said. “I hoped one day in the future I would get to go, but I never dreamed of this. My parents know they will keep us in safe and nice places.”

There’s also one other personal reason this means so much to LaCroix.

“My grandpa was in the Korean War. My dad is really excited about that,” LaCroix said. “It’s going to be cool following in my grandpa’s footsteps. That just makes all this even more meaningful for me.”

Senior Jessica Hardin gave Kentucky a needed boost last season when she joined the team when coach Matthew Mitchell had a number of players transfer. She was on campus as a student, tried out and made the team.

She played well early before a midseason concussion limited her opportunity. This year the former 12th Region Player of the Year from Wayne County was expected to play a bigger role on UK’s young team. Instead, a leg injury has limited her to just 10 games, including only one one-minute appearance in SEC play.

“She was out for a while as far as games go, but she’s modified practice and we’re just trying to work her back in. It’s a situation where she hasn’t been able to get a lot of reps, but she’s progressing and getting better. So, we hope we can get her on the court soon,” Kentucky coach Matthew Mitchell said.

Kentucky fans in Rupp Arena will be in for a treat again Feb. 17 when the Cats entertain Alabama because the Firecrackers, a performance jump rope team of fourth through eighth graders from Kings Local School district in Ohio, will be back with their high energy halftime show.

“I remember my first time when we were invited. They took me out to the floor before the game and I thought, ‘Oh dear God. No way we can do this. I don’t know how this happened and we got here.’ Just the sea of blue and enormous roar of the crowd is overwhelming. Our first trip the crowd roared and scared a couple of the girls so bad that they cried on the floor.”

If you don’t get to see them Feb. 17, you will get another chance if you go to the SEC Tournament in St. Louis. For the first time, the Firecrackers will perform — probably on Saturday during the semifinal games.

Quote of the Week: “It meant a lot to me that the President of the United States wanted to honor me. It was very humbling. We got some time with him. It was very special,” UK fan Matthew Bradford, who is blind and disabled after being injured in Iraq in 2007, on being the guest of President Donald Trump at the State of the Union address last week.

Quote of the Week 2: “All athletes require some type of mental discipline but gymnastics is different. If you mess up, you are on the spot and in the moment. You have to let it leave your mind and forget about it until you watch film and get to nitpick what you did wrong. It does take a lot of mental toughness,” UK gymnast Sydney Dukes on if gymnastics requires more mental toughness than other sports.

Quote of the Week 3: “I didn’t know Alabama was as skilled as it has shown. They are a really good team and can be really, really good. Alabama has so many athletes. They can really defend you and they have three very good wins over Auburn, Oklahoma and Florida,” ESPN analyst Seth Greenberg on Alabama, a team UK will host February 17.