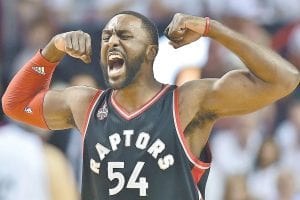 Patrick Patterson has become an NBA veteran and his mother, Tywanna, loves the way Toronto coach and former University of Kentucky player and coach Dwane Casey looks after her son.

When Patrick Patterson joined the Toronto Raptors two years ago, his mother admits she did not know coach Dwane Casey was a former Kentucky player or assistant coach.

“I just did not know that at all,” said Tywanna Patterson. “But I love Dwane Casey. He lets young men play their game. The NBA is a little different from college. In college, whatever the coach says goes. In the NBA, there is more leeway and if a player has an idea for setting up a play or something, the coaches listen.

“Dwane is a good family man. He creates a family atmosphere and I love that. I want a coach to love my son or have his best interests at heart. Dwane does that. He takes care of my kid.”

Actually, her “kid” is now a six-year veteran who played in the Eastern Conference finals this year and has scored 3,301 points; grabbed 1,940 rebounds; handed out 502 assists; and blocked 226 shots. He’s played with Houston and Sacramento also.

“Six years and he’s a veteran. It’s just crazy to think that,” Tywanna Patterson said. “But we love Toronto. We are surrounded by fans that are so passionate. It reminds me of Kentucky.”

Her and her husband, Buster, as well as Patrick Patterson always get plenty of reminders about Kentucky when he plays in Indianapolis, Cleveland or Detroit — NBA venues where UK fans can drive to easily.

“The fans are still as great as ever,” Tywanna Patterson, who now lives in Union, Ky., said.

It was the same when Patrick was a prep star in Huntington and was being recruited by some of the nation’s best programs. There were numerous rumors that Patrick Patterson and Jai Lucas would be a package deal to UK for coach Tubby Smith if he had stayed at UK instead of leaving for Minnesota.

“I think the media kind of blew that up,” Tywanna Patterson said. “Patrick did mention, ‘Wouldn’t it be great if we went to Kentucky together?’ So it went in their heads but they had to make their own decisions. Jai made his decision before Patrick did. He chose Florida, and we’re like, ‘Oh, what did he do that for? He said he was going to Kentucky. So, I’m like, ‘Patrick, you have to make your decision what’s best for you.’” 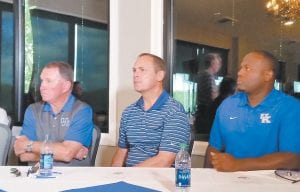 Rich Brooks, left, has not been surprised that Jacob Tamme and Wesley Woodyard have had successful and long NFL careers. Also pictured are former UK defensive end Jeremy Jarmon (right) and Jim Kovach, who starred at linebacker for the Wildcats in the Seventies. (Larry Vaught/Verizon Photo)

She remembers about 18 to 20 schools that her son initially liked before he reduced his list. She said it was a “crazy” time.

“We had a cell phone and he was on my plan. Back then there was not unlimited text messaging,” she said. “One month my bill was over $400. All these coaches were calling. I was like, ‘Can you please stop calling and let us call you?’”

Her son always felt an “alliance” to Kentucky and Smith. She said Patrick worried Billy Donovan would leave Florida for the NBA, which he eventually did.

“We loved Tubby and when he left Kentucky, we were not sure what to do,” Tywanna Patterson said.

Obviously, Patrick Patterson came to Kentucky, endured two brutal years with Billy Gillispie and then got to play one year for John Calipari before becoming a first-round NBA draft pick.

I recently asked former UK All- American Jack Givens to explain to me why Skal Labissiere was still a first-round pick and what he thought his career might be like.

“He has a skill set not many guys his size have — his ability to run the floor, pretty good jumper. He will get stronger. That is not a real concern with guys in the NBA,” Givens, a former NBA player and NBA TV analyst, said. “You can see he will get better on the offensive end. He can face the basket and can knock down an 18-foot jump shot.

“The real question is how long will it take him to get better. He was a relatively inexperienced player coming into UK. He had a lot to learn, probably a lot more than most guys. I think he will be a good player. I don’t know if he will be a future star, but he will likely be a serviceable player.”

One plus that new UK offensive coordinator Eddie Gran will have that is probably a lot more important than many realize is veteran center Jon Toth, a two-year starter who could again be UK’s best offensive player.

Gran says it is “huge” to have player of Toth’s ability to anchor the offensive line.

“You have a quarterback and then a quarterback of the offensive line making all the calls and getting everybody going. I think that first (offensive line) group is a really sharp group. They did not have a lot of missed assignments in the spring. Now it is about being physical, coming off the ball and doing everything right,” Gran said.

“John knows where to go and when to go. I think he anticipates well. He studies and understands the defense. That is huge for a center. He is really good at pass protecting.

“ He is a really good run blocker, too, but being matched up sometimes in a 3-4 defense where he is one one one with a nose guard, I think he matches up well.”

Toth is just as happy to have Gran and quarterbacks coach Darin Hinshaw running the UK offense even if it is fourth offensive coordinator in his five years at UK.

“They are great human beings and even greater coaches,” Toth said. “You can tell by the way they go about themselves in the football building that they love the game of football.

“Really there hasn’t been too big of changes, a few terminology and some scheme changes. All in all, it’s been a pretty easy transition.”

Toth did not make any of the preseason all-SEC teams selected by the media at the SEC Media Days, a slight that irritated former UK quarterback Freddie Maggard.

“He’s the best center in the SEC,” Maggard said. “That was ridiculous.”

Former Kentucky coach Rich Brooks has not been surprised by the success two of his former players — Jacob Tamme and Wesley Woodyard — have had in the NFL. Both will be starting their ninth NFL seasons when they report to training camp.

“Coach Brooks was a huge part of my career,” Tamme said. “It’s amazing the things he said to me. One thing I try to keep in mind is that small words of encouragement go a long way. I remember coach Brooks always saying things to spur me on.”

Tamme says Joker Phillips, who jumpstarted his career when he moved Tamme from receiver to tight end, did the same as UK’s offensive coordinator.

He remembers being at the CATSPY Awards after his senior season and looking forward to seeing if he could make a NFL roster when Phillips stopped him.

“He said, ‘Jake, you will play as long as you want,’” Tamme said. “That was a nice thing to say. People say negative things but a word of encouragement like that means a lot and I try to do that for younger players now.”

Neither Tamme or Woodyard were seen as huge stars when they came to Kentucky. Not many expected them both to last so long in the NFL, either.

“I knew they were good enough. My question was whether they would be able to stay healthy enough with their size,” Brooks said. “They are both a little undersized at their positions obviously, but they are great people and great individuals and they know how to take care of themselves.

“And they are very smart. They get what they need to do and go out and do it. Tremendous athletes and tremendous people. I still talk to both of them all I can.”

Kentucky recruiting target DeAndre Ayton, a 7-foot center who plays for Hillcrest (Phoenix, Az.), had a fantastic showing at the Peach Jam. He averaged 21.5 points, 12.8 rebounds, 2.4 blocks and 1.9 assists per game in seven games to help California Supreme reach the tourney semifinals.

He shot 54 percent overall from the field and 72.7 percent at the foul line. He also put up 12 3-points shots, but made only two. However, no one doubts his shooting range.

He can score inside, make midrange jump shot, block shots and dominate rebounding. Some have questioned his intensity, but he had no problems at Peach Jam.

Ayton lists Kansas, Arizona and Kentucky as his final three schools. Most recruiting analysts believe Kansas leads, especially since UK backed off his recruiting for a time before resuming efforts to land the player many consider the top recruit in the 2017 class.

Ayton may have a little DeMarcus Cousins-type personality. Or maybe Willie Cauley-Stein would be a better comparison.

He cannot say no to a picture or autograph request from a youngster.

“I like stuff like that. I am not there to like LeBron (James) and that kind of status. I just can’t ignore the kids. I am still a kid myself. I would like for somebody to sign an autograph for me as well. I would have fun just hanging with kids. I love kids. That is just me,” Ayton said

Just don’t think he is not serious about basketball.

“I just love shooting. I work really hard when I put my mind to it. Sometimes I overdo it. When I am putting up shots, I put up more than I am supposed to. I put up shots until I get sore, even before a game. Just overdoing it sometimes is a problem for me,” Ayton said.

He only started playing basketball about six years ago in the Bahamas and while he’s being projected as a potential No. 1 pick in the 2018 NBA draft, he admits he knew little about the NBA when he came to the United States a few years ago and is still learning.

While some have speculated he might bolt overseas rather than play in college next season, Ayton says that is not true. He also will not be part of any package deal with another top player.

University of Kentucky deputy athletics director DeWayne Peevy briefly discussed the work being done at Rupp Arena, including wi-fi for all in the area next season, during an appearance at the Ohio UK Convention last week.

“There is nothing off the table at this point,” Peevy said. “We are still in negotiations. Our contract (for Rupp Arena) runs out at the end of the 2017-18 season. Nothing is off the table. It’s a 40-year-old building.”

Fans liked his announcement that there would be no increase in ticket prices of K-Fund donations for basketball season.

“We want to grow the numbers, not the price,” Peevy said.